Four More Races in the Books – Two to Go! 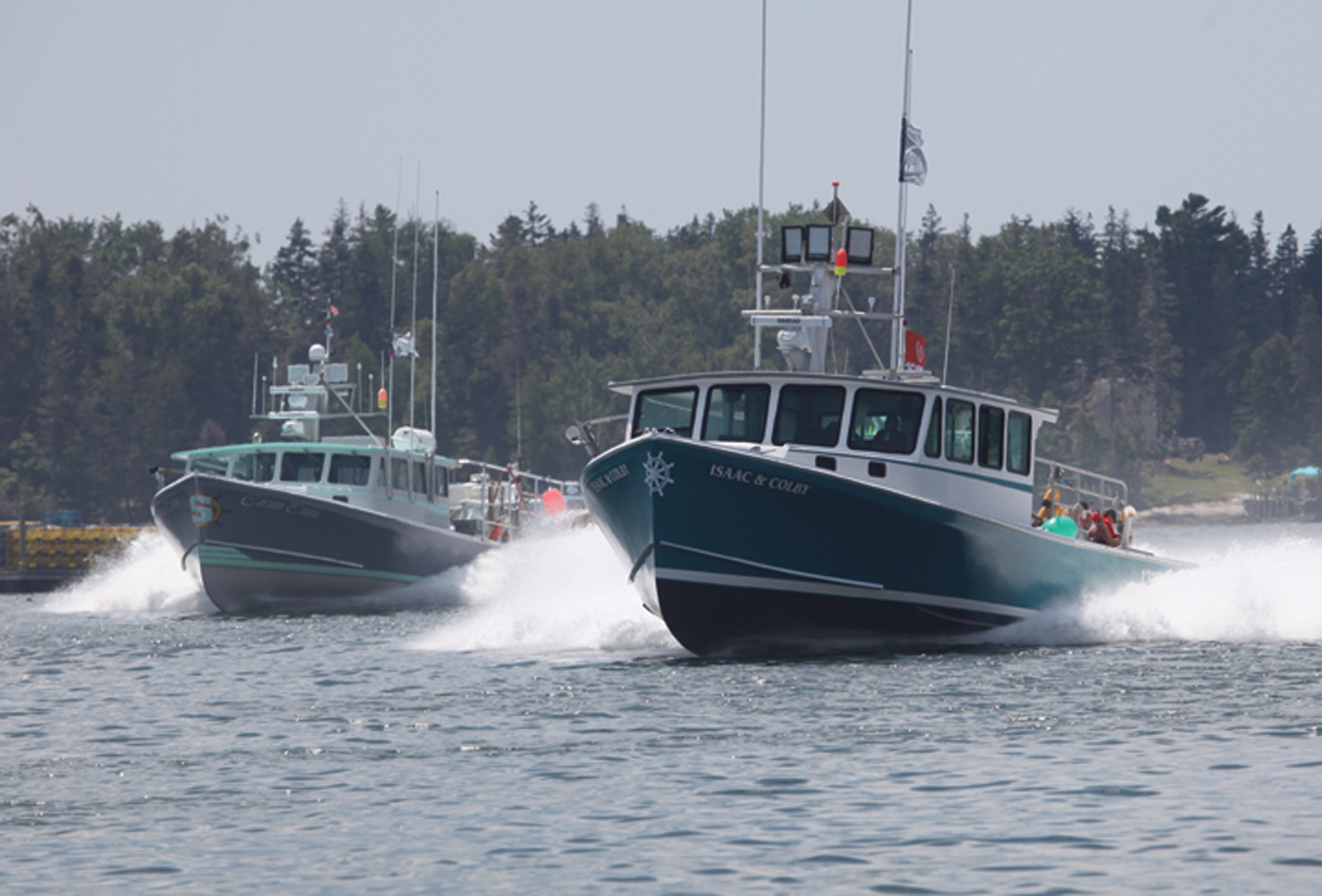 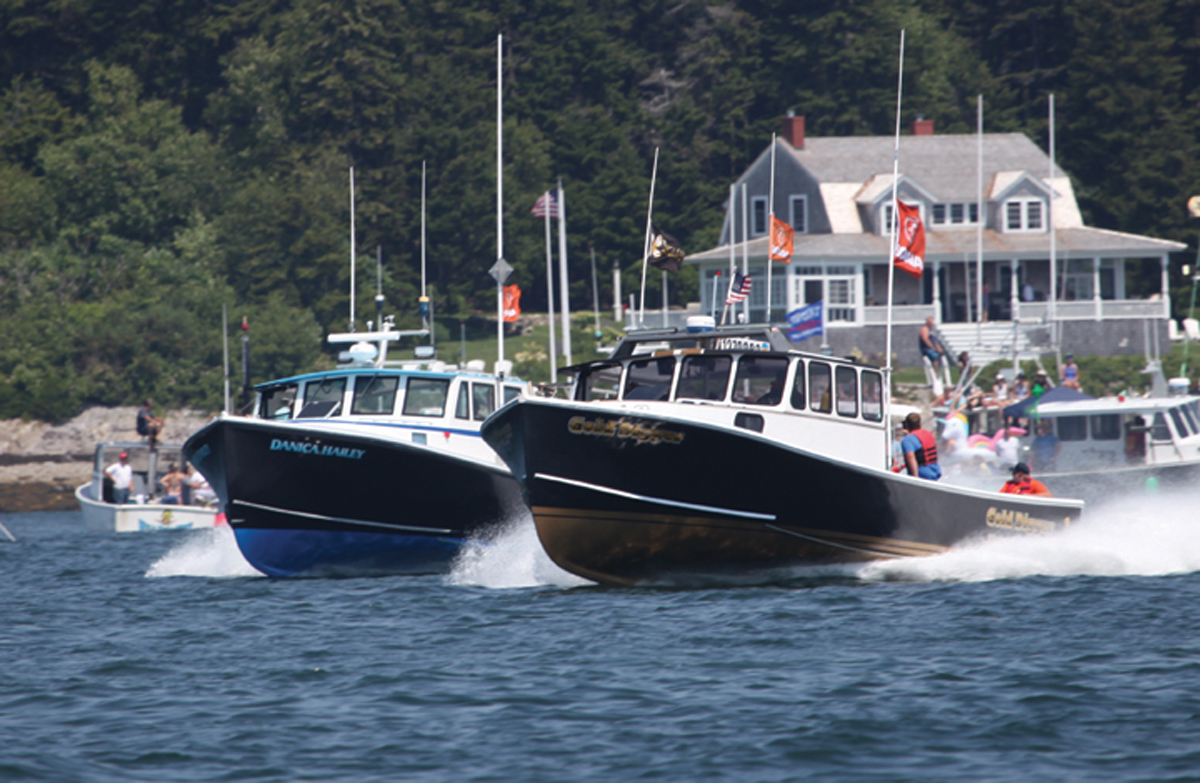 Carl Anderson III’s DANICA HAILEY doing all he can to keep up with Heather Thompson’s GOLD DIGGER in Diesel Class J. 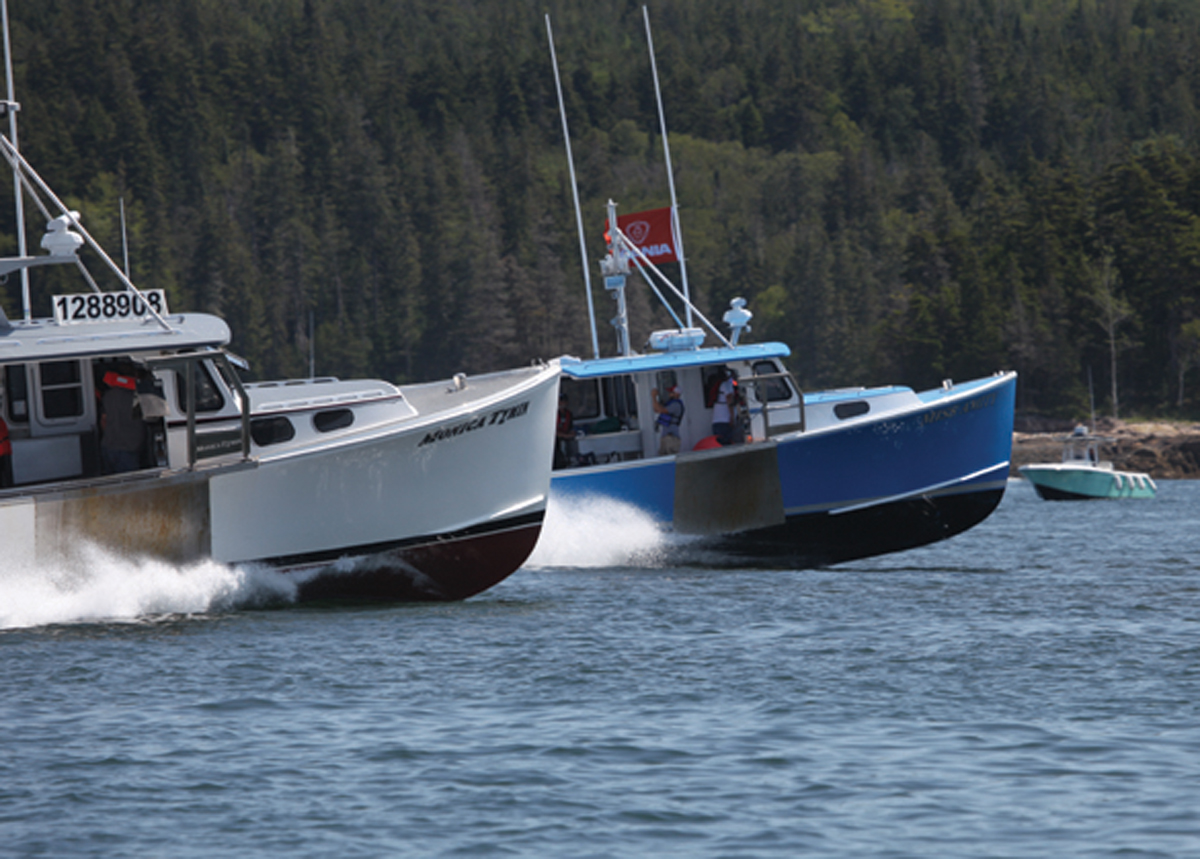 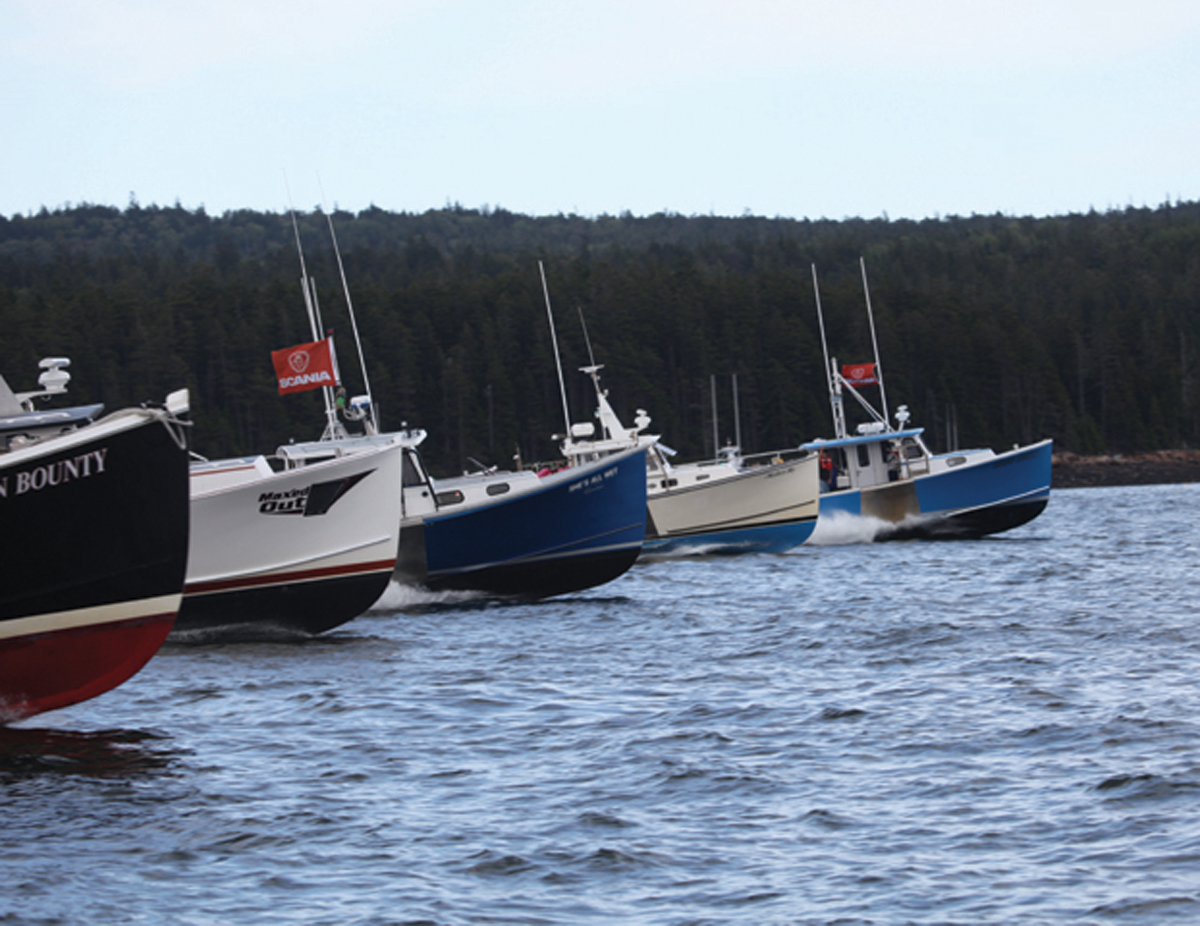 The Lobster Boat Racing season is moving right along, with nine completed (Boothbay, Rockland, Bass Harbor, Moosabec, Stonington, Friendship, Harpswell, Winter Harbor and Merritt Brackett at Pemaquid ) and just two to go (Long Island and Portland). We have already covered the first five races and in this issue we will cover the next four, The last two and the year end results will appear in the next issue. If you cannot wait until the end of September go online to mainescoast.com and these races should be up by the end of August.

The Friendship Lobster Boat Races were held on 21 July. There were beautiful sunny skies, no fog, no breeze, and hot. Fortunately a sea breeze filled in nicely after the races got going and it was very comfortable in the middle of Friendship Harbor.

Sign-ups started slow and by 0900 there were no more than 15 boats registered. Then we learned that a lobstermen rally was taking place in Stonington and wondered what effect that was having. Just as we got ready to close sign-ups down with 30 boats another rush took place and we ended up with 39 racers, one more racer than last year. The race committee had gathered a lot of prizes and those that came reaped the benefit.

There were some close races in several classes, which kept the race committee on their toes. When the racers in the final race crossed the finish line and the harbor was quiet once again the big winner was Cameron Crawford’s WILD WILD WEST [West 28; 1,050-hp Isotta], who won Diesel Class O, Diesel Free-for-All and Fastest Lobster Boat.

This is one of the best places to race on the coast and I fail to understand why there were not 60 or more boats signed up to race. They had a great day and great prizes and that should translate into a good turnout. Make sure you mark your calendar so you do not miss this event next year!

As we have at every race to date, and right through to the last one in Portland, there has been a moment of silence to honor lobster boat racer Galen Alley who lost his life in a traffic accident last winter. At Friendship they also honored one of their lost fishermen, Robert Gray, who passed away this past winter.

The highlights of the Friendship race: There was a good turn out in the three Work Boat Classes. Work Boat Class A winner was Nolan Gahagan [Holland 14; 30-hp Suzuki]; in Class B the winner came all the way from the clam flats of the North Shore of Massachusetts came Frank Bennett’s NADEN [Naden 16; 60-hp Suzuki] who easily got the top spot; and the winner in Work Boat Class C was Dave Johnson’s CASCO MISS [Eastern 22, 250-hp Honda] from Peaks Island with a speed of 47.4 mph.

In the Gasoline Classes the winner in Class C was Randy Durkee’s BLACK DIAMOND [Holland 32, 454 Chevrolet], who also won the Gasoline Free-for-All.

The following weekend we headed to the Harpswell Lobster Boat Races (Sunday, 28 July). What a great day for racing. I worried that Harpswell would be fogged in, but fortunately as we neared Harpswell the fog broke and it was clear sailing the rest of the way. Sign-ups started just after 0800 and it went slow, to point that I started worrying that we were not going to break 30 boats. At about 0900 a number of boats came into the harbor and gave us a total of 38 boats. Just before the start of the races there was a moment of silence for Larry Ward, his father and Galen Alley. Larry was the person you stepped up to run the Harpswell races in 2018, which had not been run since 2013. At the end of the 2017 racing season he found out what he needed to do to make it happen, put together his “Angels” and they were off. Larry and his “Angels” beat the bushes for prizes and racers and the day went off without a hitch. He was working hard on this season, when he passed away late this past winter. Fortunately his “Angels” and friends all stepped up and took over the reigns and did a great job making it happen, all in his memory.

There was just one Gasoline class with no entrants, Class D and there were two in the Diesel Classes: Class E and G. Since there were a number of classes with just one entrant we combined a number of the races. In the Gasoline Classes there was only one entrant in each of the classes so they were run together. In the Diesel Classes we combine Class B, C and D; K and L; and M(A), M(B) and N.

All in all it was a great day of racing and the parties were legendary. Many of those attending the races headed up and had lunch at either Erica’s Take Out or the Dolphin Restaurant.

The following weekend we had off and then it is onto Winter Harbor on 10 August and the following day we headed to Pemaquid for the Merritt Brackett Lobster Boat Races. Winter Harbor was giving away a full-sized lobster boat hull, a 35-foot Mitchell Cove. The last time they had one was in 2002 and it drew 130 boats, this time the got 167 boats. There was only one Gasoline Class, Class A, that there were no entrants in. On the other side of the spectrum there were two Classes, M(B) and N+ (45 feet and over) that had so many entrants that they needed to be split up into heats. For the first time in more than 20 years they had an outboard class. The rule was that they had to be over 18 feet in length and have either an electric or hydraulic hauler. There were 11 racers in this class. Over the years they have always had a Lady Skipper’s Race, but this year they had to own the boat and have a lobster fishing license. Another new race this year was Hard Chine Boats, which was dedicated to the memory of Ron Thomas, former owner of R. E. Thomas of Hancock.

It was a great day of racing and the excitement was provided by MARIA’S NIGHTMARE in the final race of the day when she rolled over on her side doing over 55 mph. When she settled back down Jeremy hit the fuel again and over on her side she went again.

This year’s race was dedicated to Keith Young, who ever since the first race at Winter Harbor, has been instrumental in running them. His dedication to the races is why they have been one of the best lobster boat races on the coast.

The Merritt Brackett Races at Pemaquid drew a large contingent of racers. They are the only race on the coast that is not a points race because they run different classes and that means some racers are not pitted with the same boats they race against the rest of the year. As for the spectators who want to see a race from land this is the best one as they can sit at the fort and the racers come towards them and race by the point and into the harbor.

On 17 and 18 August the final two races of the year, Long Island and the MS Harborfest in Portland will conclude the 2019 racing season. No question this has been the best lobster boat racing season to date. We have had great racing and more racers than ever and hopefully the last two races of the season will add to this great year.