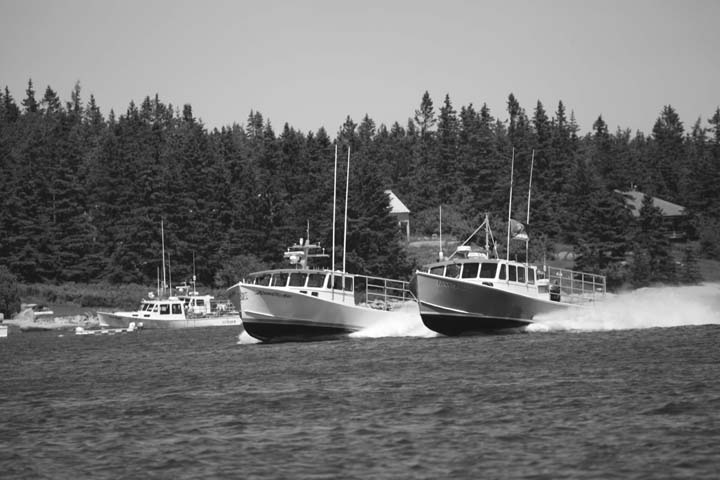 One of the best battles last year between KIMBERLY ANN and MISS AMITY.

ROCKPORT – It looks like we have made it through another winter and presently we are basking in unseasonably warm temperatures and the extended forecast looks favourable for the next couple of weeks. However, comedian Bob Marley says he is waiting for the sucker punch, because every Mainer knows there should be at least one more significant snowstorm.

As spring is just around the corner so is the start of the Maine lobster boat racing season: just three and a half months away. Like every year, we held a brief meeting at the Maine Fisherman’s Forum at the Samoset Resort in Rockport on 7 March. It is well-known that if you are just a few minutes late to this race meeting you might miss it, this year it was done by 0903!

This meeting, held in the Stevie Johnson Wedding Chapel (also known as the Golf Club), was just an overview of the Annual Meeting held at the Awards Banquet, which took place at Robinson’s Wharf on Southport Island on 19 October.

At this meeting last year’s sponsors (Elite Airways; and) were thanked. Already signed up for the 2020 season we have DC Air of Winter Harbor; Liferaft Services of York; Motor Services Hugo Stamps; New Hampshire Motor Speedway; and Scania (Mack Boring) with a couple of others interested.

The officers for 2019 or the same for the 2020 season. They are: President, Jon Johansen; Vice President, Travis Otis; Treasurer Rachel Elward; and Secretary: Genevieve McDonald-Kurilec.

There are no class or rule changes for the upcoming season, however, there is a minor change to sign ups. When a racer signs up, he will receive a schedule of the day’s events. To eliminate confusion, we are going to mark on this sheet the races he is signed up for with the hope that this will eliminate problems on the race course.

The last item on the agenda was the 2020 schedule, which is:

The only race that is not a points race is the Merritt Brackett races held at Pemaquid.

You will note that there are two races on 16 August: the Merritt Brackett Lobster Boat Races in Pemaquid and the Portland Lobster Boat Races. We were hoping that the Merritt Brackett Lobster Boat Races could be moved to the weekend before, but the town declined. Just before the Forum started it was learned that the MS Society had dropped their fund-raising participation with HarborFest. That opened up an option, but because this race is the same weekend as the Long Island race, it did not make sense to move them, at least this year, so the two races will run the same day. Now next year we have the same problem and options will be discussed at the Annual Meeting in October.

Following the meeting we watched a slide show prepared by the Penobscot Marine Museum of Searsport. There were slides of old fishing schooners, herring seining around Boothbay, and old lobster boats from Stonington and Winter Harbor.

Following the slide show another meeting was held to elect new members to the Lobster Boat Racing Hall of Fame. Those already inducted include: 2012: Gus Alley; Benny Beal; Isaac Beal; Merle Beal; Richard Duffy; Jerry Farrin; Will Frost; Corliss Holland; Ernest Libby, Jr.; and Young Brothers, Arvin, Arvid and Colby. 2013: Andrew Gove; Freddy Lenfesty; Brian Robbins; Lewis Stuart; and David Taylor. 2014: Calvin Beal, Jr.; Sid Eaton; and Jim Preston. 2015: Osmond Beal; Bill Hallinan; and Glenn Holland. 2016: Clive Farrin and Bert Frost. 2017: Donn Page and Spencer Lincoln. 2018: Keith Young and Richard Weaver. 2019: Galen Alley and Wesley Lash. Over the last four year we have nominated two people per year, but it was decided to up that this year as there were a number of very deserving people. It did not take too long before a consensus was made and the following were nominated for 2020: Vance Bunker; Wayne Canning; Doug Carter; Keith Otis; and Chuck Williams.

Rumors have been flying around most of the winter surrounding the upcoming racing season. Last fall, Cameron and Glenn Crawford, owners of WILD WILD WEST [West 28, 1,050-hp Isotta] did some engine work and have her up over 60 mph. Just how fast has not been said. The biggest news is Tom Clemons of Harpswell has sold MOTIVATION [Northern Bay 36, 1,000-hp Caterpillar] minus the engine to Alfred Osgood out on Vinalhaven. We are hearing that Alfred will be putting the big Mack in her and hopefully we will see her this season. The bigger question is what will Tom be racing? In other news there is a Mitchell Cove 35 with a big Cummins generator engine on a V-drive coming out, but it is not known if she will be done for this season. Wayne Beal of Wayne Beal Boat Shop in Jonesport is getting a Wayne Beal 32 powered with a Cummins and his son, Jeremey, will be repowering MARIA’S NIGHTMARE with a Cummins. Not sure of the horsepower, but one can bet it will be enough to dominate the classes they choose. Tim Toppins of Toppin’s Diesel & Marine in Columbia Falls is having a Mitchell Cove 35 finished off with a Scania engine and she will be out for the Boothbay races. Gary Genthner of Round Pond has purchased a Mussel Ridge 28 and he is expected to be ready this season.

We had an excellent year last season with the most boats ever competing and this one is shaping up to be even better!