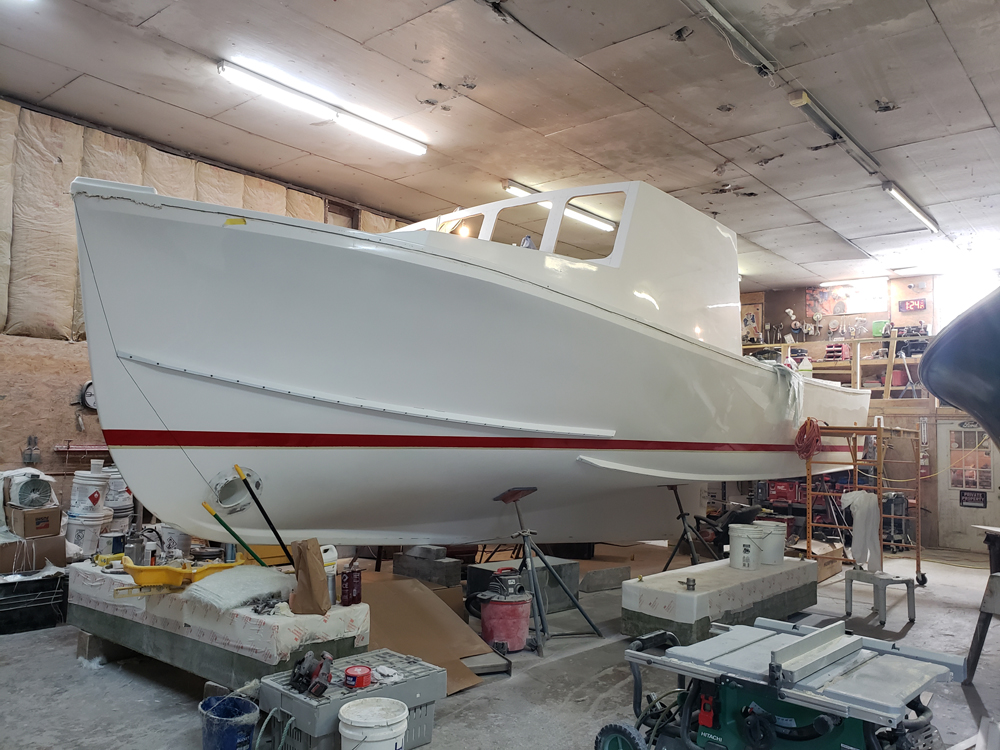 At Mainely Boats in Cushing they are finishing off this Calvin 36 as a sportfisherman for a customer out of MA. She will be launching in the spring.

I always find something interesting going on at Al Ross’ bench. Currently he is making repairs to a model of the NS SAVANNAH. Al said that it was in pretty rough shape when it arrived, with no fittings left on deck. Another person had done some work before being shipped to BlueJackets, which mostly consisted of painting the hull. Al painted the deck and then mounted all the new hardware.

This was a model once offered by BlueJackets and when Nic asked the readers of his newsletter if they thought the model should be re-released he received a favourable response. So, they are seriously thinking of offering this model again, but before that can happen they will have to do a total upgrade to the kit and plans.

On another bench in Al’s workshop he is progressing on the model of the pre-dreadnought OREGON. The hull is shaped and primed and he is presently working on deck structures. He just sent out about 900 pieces to be photo-etched. He is also working on the plans, which will now be offered in a booklet, and not large, rolled up sheets. He added, “Because there is so much laser work, each sub-assembly unit will have its own 11 x 17 page. They will all be in alphabetical order and I did it because this will be the actual size of the sub-assembly units and how they go together.”

For years Al used to draft all this by hand, but two years ago he entered the computer-age. He explained, “I am a believer, the only thing that I find sort of negative is you lose your style. I used to be able to look at a drawing and say well, that is so and so. This is great because a straight line is a straight line, but it’s kind of a trade-off. It is much quicker and you could get some marvelous detail, but I don’t know…I haven’t given away my drafting equipment yet.”

Al is working on a book of small combatants and showed by a drawing he had done of MGB 109, built by the British Powerboat Company, which is his favorite motor gun boat.” It was a beautiful draw with incredible detail, which would be extremely time consuming if done by hand.

Al is also working on a model of the six-masted schooner WYOMING. Doug Lee helped him with a lines plan and Al has created the bulkheads and the backboard for mounting them. She is going to be a good-sized model with a length from boom to boom of 56½-inches. Once the bulkheads are mounted on the backboard, the builder will have to plank her. Al said, “Instead of using the glued-up decking for planking, because it is just too long and will give you an unnatural looking splice, they will use somewhere around 250 1/16th square strips to plank the hull. This is because the length of the planks you will be able to stagger the butt joints like they would with the real vessel. There are also 250 stanchions for the rail and I think they are about 3/16 of an inch high. Really low rail on her.”

It will be awhile before this kit is ready to go on sale.

Nic, the owner of BlueJackets, is rigging a model of the clipper ship RED JACKET, which was built in Rockland in 1853. That morning he had put on the t-gallant yards.

A teacher has just ordered 20 Optimist dinghy kits for a class she is doing on model building. The students are from 10 to 14 in age and they are going to have five 1½ long classes with lots of homework. Nic said that he has already sent them the plans so they can get a ahead start.

In one bay they have a Flowers 46, a modified Flowers 43, which they are finishing out as a sportfisherman. For accommodations she has two staterooms, two heads with separate shower and galley. Up in the shelter she has an L-shaped settee, another galley and a drop window in the back with a mezzanine seat, aft station and retractable swim platform. She is powered with a 900-hp Scania. They are nearing completion with just hardware and minor details to finish off. She will be going over in the spring.

In the next bay they have a Flowers 43, which is being finished off as a pleasure cruiser, powered with a 900-hp Scania. Down below she sports a big stateroom with a head, another head and a mid-level galley. She will have bow and stern thrusters with a joystick remote and a gyro to limit her movement.

In the lower shop they are finishing off a Flower’s 38 as a charter boat. She has a V-berth and bunks forward, separate head with shower and is powered with a QSM 11 Cummins.

When asked about launch dates, they said that since they have been having problems getting items they are not giving dates. They had windows and doors ordered for one of these boats, but they never arrived and this forced them to make their own.

They also have two more 38s after this to do.

Like most boatbuilders on the coast, there is a lot going on. On the floor they have four 22s, Calvin Beal, Jr. design, underway. Two of these will have cabins and the other two will be centre console with T-tops. They are all powered with an outboard, in the 175 to 200-hp range. All four will be going over in the spring. When the four on the floor are complete they have two more to build.

Outside they had a new 22, which they built on spec ready for an owner. There was also a 26, which was finished off as a pleasure boat for a customer from Kennebunkport that they are getting ready to deliver.

They store about 15 boats and these should all be up and ready for the winter by mid-November.

In the far bay, they have an Osmond 50 x 19′ 2″ kit boat getting ready to ship to Gloucester, Massachusetts. She is going to be finished off as an offshore lobster boat by Kyle Grant. He would be helped by the owner and the owner’s son. This one should be in Gloucester the second or third week of October.

Next to the 50 is an Osmond 42, which is being finished out as a crab and dragger for a fisherman from San Francisco. For an interior she will have berths and a head forward, small galley and a settee. She is powered with a 750-hp John Deere and will have a gen-set.

An Osmond 32 is being finished off as a sportfisherman for a customer from Montauk, NY. She has a V-berth and up in the shelter a captain’s seat and settee. She is powered with a 400-hp John Deere. They should have her done by mid-November and then she will be shrink wrapped and stored for the winter.

The there is an Osmond 40 being finished off for Paul Hebert of the TV show ‘Wicked Tuna.’ She is scheduled to be done the end of October and then the electricians will finish her up. For accommodations she has four bunks, an enclosed head, shower, hanging lockers, storage cabinets, gensets, live wells, live tanks and transom doors. She is powered with an 11 liter 625-hp Volvo with 450-500 gallons of fuel.

In the mould they are laying up a 46′ x 17½’ lobster boat for a fisherman from Mount Desert Island. She will be powered with a 1,000-hp Cat coming from Billing’s Diesel.

Out back they have someone leasing space, which is being repowered with some repairs on a lobster boat.

Next they will be laying up an Osmond 27, which they have not done for a number of years, for a customer from Long Island, New York. She will be spartan with a 400-hp Yanmar.

Then they have a deposit on a 51-foot hull and top, which will be finished as a Coast Guard certified boat. A 34 will also be Coast Guard certified and double of as a lobster boat. Both of these boats will stay here in Maine. Then there is a possibility of another 42-foot pirate boat and a 46-foot kit boat.

One of the boats in the shop is a Calvin Beal 34, which is being finished out as a sportfisherman for a customer from Boston. For accommodations she will have berths, head and galley. For power she has a 500-hp Cummins with Soundown and a Soundown muffler.

The other boat on the shop floor is a Pemaquid 26, which came in last year. She has got some issues that need to be repaired and this means ripping up the platform before they can start going forward. This will be a big project this winter.

STARLIGHT EXPRESS (ex-MOTIVATION) has been finished and shipped to Mid-Coast Diesel to have her engine work completed.

A Duffy 35 is outside after having been completely refurbished. Mike Hooper, owner of Mainely Boat, said that they completely gutted her from the bulkhead aft. They then repowered her, added new boxes, rewired, all new rails, and then painted the hull. Next, they will get her drag gear re-installed.

They also have some other repair projects coming, mostly from out of state customers. A Dixon 45 will be arriving mid-October to get new tanks and platform.

A new Calvin Beal 44 hull will be arriving, but they probably will not be able to start this project until spring.

Center stage in the shop is a Calvin Beal 34, which hit a ledge and damaged her skeg, shaft tank, rear sharp-riser, shaft tube and rudder. Within a couple of days they had her dismantled, assessed the damage, and got an estimate done. With that done, they were prepping to start putting her back together, which they thought could take less then two weeks to do. The problem might be if there is a problem with the shaft. This will be removed and check as well the rudder. Since the owner is a fishermen they are doing all they can to get him back up and running.

Just to her stern is a Mussel Ridge 28 (ex-Wayne Beal 28), which is being finished off as a lobster boat for a local fisherman on Beals Island. She will be powered with a 420-hp FTP, which should make her go quite well. The sharp-risers are in as is the engine. Next they will put down the platform. She is not scheduled to go over until next spring.

The just shipped a Repco to Toppin’s Diesel in Columbia Falls to be repowered and new thru-hulls put in. When she returns they will adapt one of their 32 tops and give her a split wheelhouse.

They have three or four other repair jobs. One of them is a wooden boat, Calvin, Jr. built in 1985. They will modify a 32 top for her. The lobster boat KARAMEL is coming in and be lengthen two feet, re-do the hull and put a new house on her. This will be followed by a South Shore 30 that Wayne Beal finished off in 1986. She needs to be re-done from the hull up. Then a Wayne Beal 36 will be in for repair work.

For new hulls they have a 32, powered with a 480-hp Cummins, for a fisherman from Portland and a possible 46.

Since they were not too busy, they decided to layup the Sundance 19s for Moosabec Marine in Jonesport.