It is a Small World 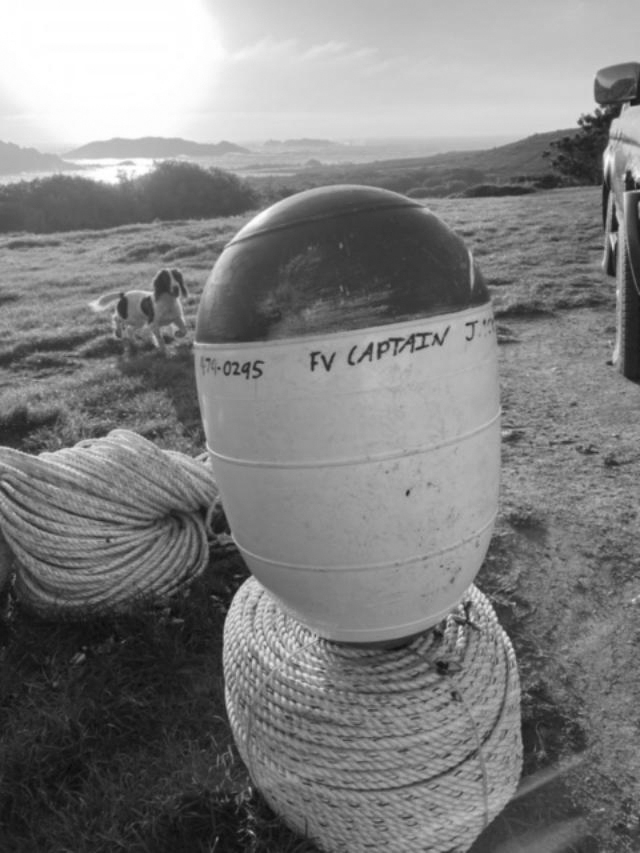 About two weeks ago, I received a text message from out of nowhere.  I didn’t recognize the origin of the message and almost deleted it, thinking that it was one of those “robo” messages.  But this time, I took a closer look at it and am glad that I did. It was from a fellow fisherman, who’s name is Andy and contacting me from Bryher in the Isles of Scilly, around 30 miles off the SW tip of the UK.  He said that for our interest, they are fellow lobstermen.

I’m taking a guess that he received my information through the Downeast Lobstermen’s Association, somehow, someway.  Andy told me that his wife picked up a buoy washed up on the beach during her afternoon walk, from one of our members, Ethan Turner and it is in great shape following its transatlantic trip!  He said that they will put it to good use.  Actually, he told me “what a small world it is now, a quick search from the info on the buoy and we are in touch.”  Andy also said for us to have a safe and profitable season to all of our members.  Well, I’ll be darned!  I certainly wasn’t expecting such a pleasant surprise as that.  I am so pleased that he took the time to follow the name and numbers on the buoy and contact us.  It reminds me of old times when people used to put messages in a bottle and hope that the message would go to someone on the “other shore.”  With this world of technology, I still find happenings like this very interesting.

Ethan took the time to put his name and numbers on the buoy, which was worth the extra effort for sure.  I contacted Ethan about this, who in turn sent me pictures of his boat, F/V Captain Jack to send to Andy.  This opened up the doors of communication from the shores of Maine to the shores of the UK.  Ethan said for him to “keep the buoy, it’s easier than going over there and picking it up.”  Well said, Ethan!

Ethan and his Dad, Hilton Turner are no strangers to this kind of thing happening.  It is a bit of a coincidence, but Ethan’s grandfather, Charlie Turner had this happen to one of his buoys many years ago and was contacted from the Cape in Massachusetts.  This is a good reminder that the name and numbers on the buoys are also a great means of communication, before cell phones and satellites.

Going back to my conversation with Andy, he said they are very much a fishing family and attached a picture of his son and boat.  They are also in business with this his Father-in-law and Brother-in-law with his wife the Boss and Matriarch of all, running Island Fish, Ltd., or www.islandfish.co.uk.  I hope that you have a chance to check out their business, as it seems that life on “the other side” is much like ours here in the Gulf of Maine. I checked out their business and found it too also be generational and very impressive. I had permission to share the conversation and their family business with our public, which is a great way to share the fact that we are a globally involved fishing industry.

If you look at the website of Island Fish, you will see that it looks much like the Coast of Maine.  The lobster looks the same as well.  One thing that I was impressed with, is that they have “Family Business of the Year.”  What a concept!  They have awards much like we have awards for the best business in our communities.  We call it “Best of the Best” and the local folk vote for the best business.

Obviously, our families are also fishing families and are proud to continue with traditions that we do not want to have go away due to all of the difficulties that we are facing.  We are all living parallel lives and something like a little trawl buoy brought us together.  Is this a coincidence or did this bring us together to make our trials and tribulations seem like we’re not the only ones trying to make it possible for our next generation to have the same opportunities that we have had and our forefathers before us.

One thing that we know for sure, fishing goes back to many generations before us. My family goes back to the Viking Days, when they only had sailing vessels and lots of oars.  At that time, it was just one of their dreams to venture out to see if there was land to the West.  They finally got away from their ruler and made it to the West and landed in the UK.  The only reason that I’m bringing this up is the fact that we all have a heritage and a reason to be proud of our livelihoods.  We do not want to let this all go “down the drain” due to such things as Windmills and Whale Rules.  This is the year 2021, which is much different than the days of the Norsemen, but we have all been around for quite a while.  I believe that we all have it in us to be around for a lot longer as well.  Without a doubt, people still need to eat, we do not want to see the whales disappear either and now the birds are in trouble due to the huge wind turbines.  The Fishermen are now the Endangered Species, but we will survive, I’m sure!