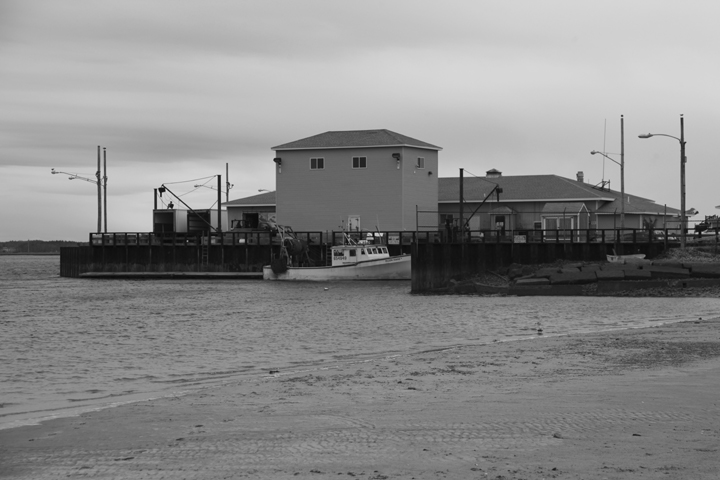 SEABROOK, NH – When coming off the North Shore of Massachusetts on Route 1A the first town that you enter is Seabrook, NH and one of my stops for several years has been at the Yankee Fishermen’s Co-op. The person who ran this operation up until a couple of years ago was ‘Red’ Marvin Perkins, who talked up the Co-op and his time fishing.

Red was born in 1951 and lived in Hampton, NH. His father was a plumber, but somehow, he gravitated to the coast. He began fishing with Ernest Knowles on the MISS IRENE and did that for a year before he bought his first boat, a 23-footer, which had been built in Florida in 1980. Three years later he purchased a 42-foot Novi, which was built by Doucette of Canada. Novis were the popular boat at the time and most of them were wooden. Red started fishing for lobsters with the small boat, but with the bigger Novi he tried ground fishing, mostly from Seabrook out to Jefferies Ledge. Fishing was good, but then the Government got involved and after 20 years Red had had enough.

Red said, “In ’90 this place was incorporated. The power plant built this because this was their barge facility at the time. They talked the state into taking it over for the fishermen if they built it. Then from there it went from the state to the town. Bob Campbell asked me about working here and I told him we ought to talk and that was it. I haven’t been back on the water since.”

This is a well-protected harbor, but mother nature forces them to have a dredge come in every few years. They are supposed to maintain a depth of six feet, but they normally take the depth down to eight feet so in case there is a few high spots. What is nice is if your boat goes adrift, it most like will ground out in the sand.

When the Co-op started, they had about 70 fishermen, and they still have about the same number today. Unfortunately, some of the old timers who were the first fishermen to sell to the Co-op have either retired or passed on. Red remembered Donnie Littlefield, who owned the HELEN PRIDE, Merrill Blake, DEBORAH JEAN, Neil Pike, SANDY LYNN to name just a few. He also met some of the fishermen from Massachusetts out there fishing.

Red added, “The big difference is the ground fishing part is really reduced. Now, there’s more lobster fishermen involved. There is like three guys still ground fishing before that, back in the better days there was probably 20 boats here, ground fish boats. All because of what the Government did with the individual quotas. The price of the boats and the permits for a young guy to get into it…hard to go to the bank and say I need half a million dollars to go fishing. It is sad because the knowledge is going to be lost. If they ever start coming back again, start allowing more permits, there is going to be a learning curve for whoever is going to go fishing. Where to go and what time of year.

There are only a few boats going out for ground fish from the North Shore, mainly Gloucester. There is a couple still going out from Seabrook and another couple from Rye. Red did not know how many were going out of Portsmouth, but knew the fleet was mostly gone. Red added, “Every harbor is in the same predicament. The last three boats that got sold out of this harbor all went south. There is none of them that stayed in the area. Two of them I know went to New Jersey.”

When asked if he thought it would come back, he replied, “No, not in my lifetime. If you go back to when they started, there was a ten-year rebuilding plan. We have long gone past ten years and who knows what the real story is.”

Always interested in find out more about boatbuilders. Red said, “The only one that I know that used to build boats, a 16-foot skiff, was Ronnie Butler, they call it a Butler skiff. It was wooden lapstrake, nice boats. There was someone in Seabrook that bought Brunos and finished them off and they had a southern hull up there that they built. There was Gagnon in Portsmouth. I believe he built two or three fiberglass 54s. There was someone on Badger’s Island off Portsmouth that built.

Like all major fishing ports there has been the tragedies. Red said that a lot of years ago they lost two who were tuna fishing. “I remember someone stole a boat one night and the guy instead of heading out the river he headed up into a crick and run it aground up there. There were lobsters tied off to the back of the boat so the owner showed up there and as he commenced loading a shot gun, the cops were telling him to unload it. They caught the guy and brought him back to the boat. The owner of the boat told the cops, ‘You just leave him here and have him get this thing out of here.’ You know that didn’t happen. Probably mid-70s, late-70s one of the boats was going fishing one morning and they had a whoops. They sunk the boat out on the rocks. They got it towed back in here and the owner said, “I don’t want it, get rid of it.” They come in and put a backhoe to it and away it went. There was nothing wrong with the boat other than the fact that he sunk it. Another time six guys took a 14-foot skiff out and was hauling gear one night. All six of them drowned. They were trying to haul gear in a skiff and they got tipped over. That probably happened in the 1980s.”

We lost a guy here this winter,” said Red. “He had his boat tied up to another one and was diving to clear the wheel, I believe on both of the boats. He had a wet suit on and they found him floating. Nobody will ever know. He just had a great personality. No matter what he did in life he was going to succeed. He was a worker.”

The person was 36-year-old Juan Peralta-Martinez of Hampton, had been selling to the Co-op the last three years. He came from a town in the Dominican Republic, which was so poor he did not see his first car until he was 6. He moved to the U. S. in 2010 and was working in a manufacturing plant. He then decided he wanted to go fishing and bought a boat, which he named NAUTI KAT. It can be extremely difficult to go fishing if you are an unknown and not part of the fishing community, but Juan had the right personality and drive to make it work. Local fishermen really liked him. He left a wife and two sons.

Most of what comes over the dock today is lobsters. Right now, there are few lobsters coming over the dock as it is not the season, but in another three months things will be going full speed ahead. There are no commercial shell fishing licenses in New Hampshire and this means no shellfish comes over the dock. They do offer shellfish in the store, but this comes from an outside vendor. Since scallops are out of the shell, they do purchase them. They also see some ground fish and a few tuna during the summer months. There used to be a lot more tuna brought in here, but not anymore.

When Red wanted to shift gears Linda Hunt took over. Red explained, “It was time for a change of the direction that we had been on for the last 30 years. She has changed a lot of stuff and it’s worked.” Linda understood markets and the using the internet to increase sales.

This is a close-knit group of fishermen in a small community just trying to survive. Red still goes in and does some of the maintenance and goes gets things they need to keep the operation running smoothly, but he is pleased he does not have to deal with the everyday operations, which allows him to enjoy life a lot more.