Get Ready for the 2021 Lobster Boat Racing Season! 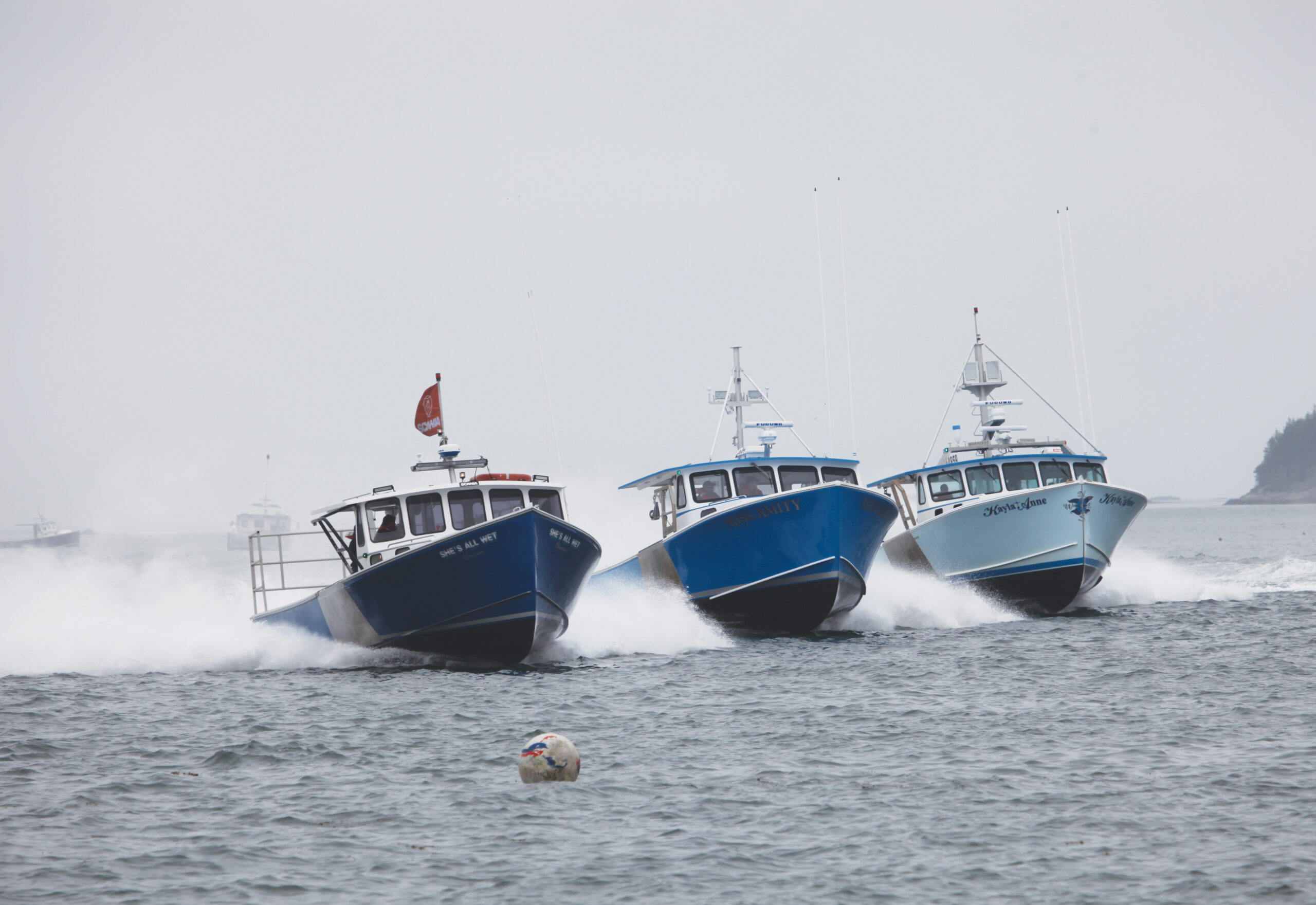 SHE’S ALL WET, MISS AMITY and KAYLA ANNE racing for the finish in Diesel Class N at Jonesport last year.

With summer fast approaching one question I am constantly asked is if the lobster boat races are running. Well, of course they are. Despite the pandemic, the Maine Lobster Boat Racing Association [MLBRA] held six of their usual 11 races last year with appropriate guidelines. In most cases, we were the only event to be held in that town for 2020. We even held the Annual Awards and Banquet at Robinson’s Wharf where any changes for the 2021 season would have taken place.

Last year was not easy for race organizers as there were several obstacles that they had to overcome to satisfy the powers to be. It was not difficult to prove that the racing could be done in a safe and responsible manner, but some towns still told organizers that they could not hold them. Others were pressured by people in town not wanting them to run. A couple of races cancelled early, and at the time the prospect of anything happening was unlikely, so their decision was understandable. In the end six persevered and made it happen, which was much appreciated by the racers and spectators.

Already there is a lot of great anticipation about the upcoming 2021 races. At the Annual Meeting and Banquet held last October there were no changes made to the rules or classes. A tentative schedule was also introduced with all 11 events penciled in and over the winter all confirmed that they planned to run this year. There are still guidelines that must be adhered to so there still could be issues for race committees to deal with. Be sure to confirm the event is on and what the guidelines might be, especially if you are signing up to race.

Those that are signing up to race the only change will be that when you sign-up that will be good for any race in 2021. So, at the next races you only need to pay the entry fee. Hopefully, this will make signups a little quicker. We are also trying to figure out a way to prepay the entry fee, but that is a little more complicated.

Those that follow the races are more than pleased that the races are on and there is plenty of discussions about who is coming out, who has new boats and can anyone break the speed record. Cameron Crawford’s WILD WILD WEST [West 28, 1,000-hp Isotta], is certainly the boat to beat. She only made two of the races last year, but we know she was unofficially doing over 63 mph at Jonesport. They set the diesel record at 60.6 mph at Bass Harbor in 2016, but some wonder if she could top the gasoline record, which stands at 72.8 mph set by FOOLISH PLEASURE at Stonington in 2011. I am sure she can best the diesel record, but the gasoline record would be a tough one to get by.

Last year we hoped to see Alfred Osgood’s STARLIGHT EXPRESS, [Northern Bay 36, 900+-hp Mack], the former MOTIVATION, but delays kept her on the hard for the 2020 season. Will she make an appearance this year? If it happens it will certainly be one of the highlights of the year to see her face off against WILD WILD WEST, and the rumours say she could be at Stonington.

Shawn Alley, owner of LITTLE GIRL [28’ Calvin Beal Jr.; 429 Ford] is trying to get his boat race ready. After blowing his engine in 2019 and running with an older performance engine the rest of that year he opted not to race last year. Now he is looking to either find another motor or rehab the blown one.

Shawn could have a challenge as the top gasoline racer since there is rumour that FOOLISH PLEASURE will be coming back racing this year. She has been sitting on the side of Route 1 in York.

There will be three Northern Bay 38s (Andrew Taylor’s BLUE EYED GIRL [900-hp Scania]; David Myrick’s JANICE ELAINE; and Jeff Eaton’s LA BELLA VITA) out with about the same hp. JANICE ELAINE and LA BELLA VITA were both repowered this winter and now have 815-hp FPT. This could be a very close race as each of them will be right around 50 mph.

There are several new boats coming out: Doug Dodge of Beals Island has finished his wooden 28-foot powered with a 350-gas engine. Doug just had a final coat of paint to do and she was ready for the water. He is planning to be at Boothbay for the first race of the year. Roger Kennedy of Kennedy Marine Engineering in Steuben built a Crowley 36 this winter and named her WHISKEY TANGO FOXTROT. Even though she has a basic interior one can bet that she will be more than competitive in her class. Jeremy Beal of Wayne Beal Boat Shop in Jonesport is building a Wayne Beal 32 and we know he is always competitive. As for which classes they are in I will wait to see what classes they want to sign up in at Boothbay.

However, all eyes are on Steve Johnson of Long Island as we know he has a turbine engine, with 2,380-SHP, which is going into a Crowley 33. No one is sure how this is going to work, but you can be guaranteed that this could be the year’s show stopper! You may ask what class he is racing in – Steve is in a class of his own!

A large contingent of racers say they are planning to be at the first race of the year in Boothbay on 19 June. This year is certainly shaping up to be another great year!