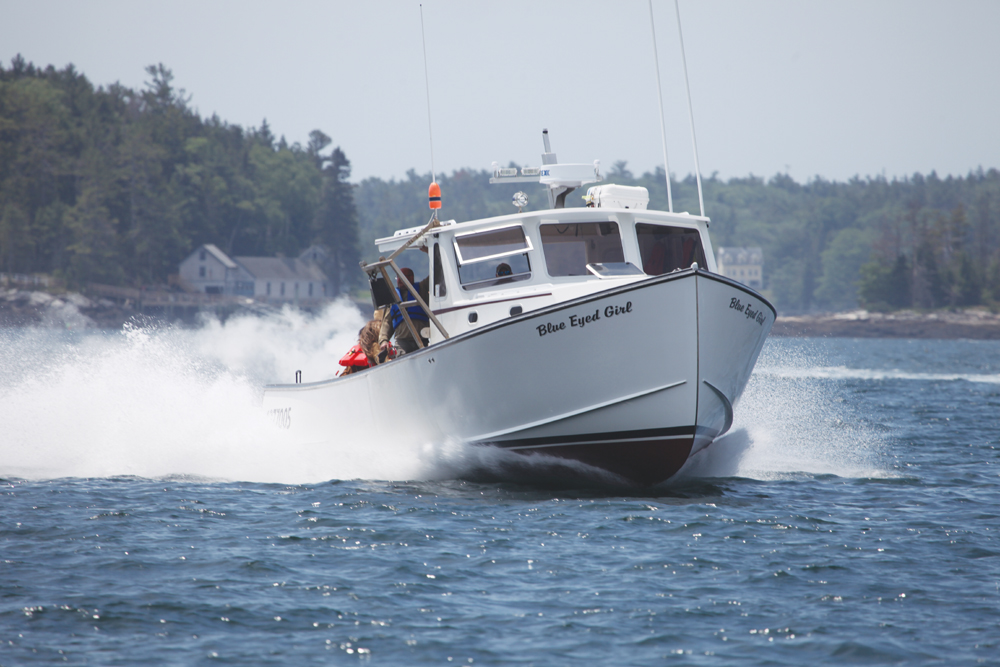 BOOTHBAY and ROCKLAND – For a number of reasons the opening race at Boothbay was anxiously anticipated this year. Some, because they had been cooped up the last year due to the pandemic, but others had new boats, or had repowered, and just wanted to see what they could do. The rumour mill had been working throughout the winter and spring and now we were going to see just what everyone was up to.

Friday evening more than 20 boats had gathered at Brown’s Wharf in Boothbay Harbor. A few Of them were from way Downeast (Beals Island, Harrington, Jonesport and Milbridge) and a couple from Massachusetts (Gloucester, Hull, and Newbury). There was also a news crew from Spectrum News of New York City and they were there doing a story on Heather Thompson of GOLD DIGGER. When I arrived, those there were just walking around, but later the fun began and it extended well into the night.

It was quiet first thing in the morning, but sign-ups remained steady till after 0900. At one point the sky turned black and then it opened up. The weatherman was correct because it was a short stint, albeit a constant down pour, followed by blue skies accompanied with a nice breeze. When sign-ups were complete 44 boat were registered to race, some new, some old but not forgotten, some repowered, and of course the usual cast of characters.

The first three races of the day were the Work Boat Classes and Classes A and B have been dominated by the Noyes’ of Harpswell for the last year or two. Emily and Jennifer Noyes were entered in Class A (Skiffs 16-feet and under with outboards up to 30 hp, Operator 18 years and younger) with JENILY [Corson 14; 30-hp Johnson] and bested William Tierney in NUGGET [Holland 14; 30-hp Honda]. Their brother Jacob in ZIPPIN’ TOO [Corson 15; 90-hp Nissan] showed their father, David, in ZIPPIN [Corson 14; 60-hp Johnson], the way to the finish line in Class B (Inboards, outboards or outdrives, 31 to 90 hp). In Class C (Inboards, outboards or outdrive 91 hp and up) CASCO MISS [Eastern 22, 250-hp Honda], owned by David Johnston of Peaks Island, got the win with a speed of 47.4 mph.

Next was the Fastest Working Lobster Boat – Boothbay and it was no surprise to see Andrew Taylor’s BLUE EYED GIRL [Morgan Bay 38, 900-hp Scania] streak across the line for the win.

There was no entrant in Gasoline Class A (4 & 6 cylinder 24 feet and over) and just one in each of the other Gas classes (SEA FOAM [James Brackett 32; 350 Chevrolet], Hayden Brewer in Class B (V-8 up to 375 cid, 24 feet and up); BLACK DIAMOND [Holland 32, 454 Chevrolet], Lindsay Durkee, Class D (V8, 376 to 525 cid, 28 feet and over). There had been rumours this spring that Mark Davis of Harpswell had purchased Jeremy Beal’s MARIA’S NIGHTMARE [Mussel Ridge 28, ex-Wayne Beal 28] and had put in a 1,000-hp Chevrolet engine with a blower and changed her name to DOWNEAST NIGHTMARE. She was entered in Class E (V-8, Over 525cid, 28 feet and over, superchargers/Turbos). She lined up with Mark Freeman’s FOOLISH PLEASURE [30’ Custom Riley Beal; 650-hp 455 Stroker] made famous by Galen Alley of Beals Island and the boat that still holds the gasoline speed record. Since there was just one in each class, they were sent up the course together with each getting the win in their respective classes. There is nothing like the sound of a big gas engine and these DOWNEAST NIGHTMARE and FOOLISH PLEASURE certainly provided that when the flag was dropped. Who was going to win was the next question, but just after the start FOOLISH PLEASURE went dead in the water and was towed back to the dock. DOWNEAST NIGHTMARE streaked up the course with a speed of 44 mph, unfortunately we were unable to get a speed on FOOLISH PLEASURE.

The next big race was the Diesel Free for All and this time MARIA’S NIGHTMARE II just got by BLUE EYED GIRL for the win with third going to JANICE ELAINE.

Who was going to win the big race of the day, Fastest Lobster Boat Race? Well, just before the race Jeremy said that he was not racing the last race. Just two came to the line with BLUE EYED GIRL getting first and JANICE ELAINE second.

One can expect some of these boats will gain speed over the next several races. Some did not have the time needed to get the bugs in fact one went over Thursday night before the race.

With the first race of the year in the books everyone was now looking forward to Sunday’s race at Rockland.

ROCKLAND – It was another fine day for racing with bright sunny skies and a nice breeze. When sign-ups were finished, we had 64 boats entered. There were a number who had raced at Boothbay, about 34, but the other 20 came mostly from local harbors.

The three Work Boat classes were up first and JENILY got the win once again in Class A as did their brother Jacob in Class B with ZIPPIN’ TOO. In Class C CASCO MISS was a no-show as her owner, Dave Johnston had a wedding to attend. In the third race, Class C, those on the race committee were wondering about the stability on DELUSIONAL [Corson 18; 225-hp Evinrude], Ron Pottle of Brunswick as she rode up on her starboard side. However, she stayed upright and went on for the win.

Next up was the Gasoline Classes, with no racers registered in Class B and E. There were four boats signed up with two boats in Class C so they were all sent down together. The winner in Class A was CINDY JEN [34’ Clinton Beal, 1964; 292 Chevrolet], Jon Johansen of Winterport; in Class C was BLACK DIAMOND with ROAR [32’ Clinton Beal, 1960; 454 ci Chevrolet], Jim Lee of Tenant’s Harbor second; and in Class D, FOOLISH PLEASURE.

FOOLISH PLEASURE would easily win the Gasoline Free for All with second going to BLACK DIAMOND.

In the Diesel Free for All the winner was BLUE EYED GIRL with MARIA’S NIGHTMARE second and JANICE ELAINE third.

ROAR won Wooden Boat Race A. You know what is embarrassing? When you disqualify your boat in the race. CINDY JEN was coming up the course and someone on the stern took their lifejacket off halfway up the course. The win in Wooden Boat Race B went to SARI ANN [42’Johns Bay Boat; 660-hp Volvo], Vance Bunker of Owl’s Head.

In the Fastest Lobster Boat Race BLUE EYED GIRL was chased up the course, but no one could get by her. Second went to JANICE ELAINE and third was MARIA’S NIGHTMARE in a great race.

With that the racing came to an end and it is now on to Bass Harbor (Sunday 27 June). Hopefully, some of the boats that missed the first weekend of racing, such as Jeff Eaton’s LA BELLE VITA [Northern Bay 38; 750-hp FPT]; Ira Guptill’s MYSTERY MACHINE [Northern Bay 38; 750-hp, John Deere]; and Cameron Crawford’s WILD WILD WEST [West 28; 1,050-hp Isotta], will make this race. Alfred Osgood’s STARLIGHT EXPRESS III [Northern Bay 36; 900+-hp Mack] is being worked on in a shop at Harpswell, but there is no timetable on when she will be ready, hopefully Stonington. Sign-ups will happen on the Town Dock on the Bernard side and racing should be underway just after 1000.