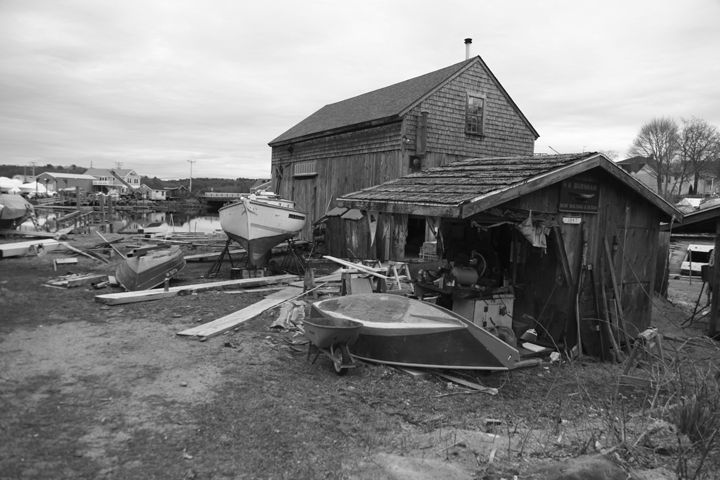 ESSEX, MA – In the last issue we talked with Harold Burnham about the former sardine carrier SYLVINA W. BEAL, which he purchased nearly two years ago. She now sits in the stream by Harold’s shop in Essex, MA as Harold readies to build a new hull in front of his home and next to his shop next year. What was not in this article was anything about Harold, who has had a very interesting life.

Harold grew up right in the centre of Essex surrounded by boats and a rich history maritime history, especially in the building of fishing schooners. The house Harold lives in he said, “This was my grandmother’s house. I spent a lot of time on this porch with my grandmother, had breakfast with her every morning in the kitchen. My parent’s house was over in South Essex, my mother is still over there. Brad Story was building boats across the creek and Dana Story, his father, owned the shipyard and was hauling boats and storing them.”

Dana’s father was Arthur Story, who was one of the best-known builders of the fishing schooner. Harold knew Dana very well and learned a lot about boats and how to build them from him. He added, “I only worked for Brad a few times. I mean it was always a pleasure to work for Brad, he’s a great person to work for but I watched him like Ralph Stanley says, “If want to learn to build boats, it’s good to go and watch.” I would build stuff myself and when I ran into a stumbling block I’d go over and ask Brad and he’d say, what are you going to do? Well, I was thinking I’d do this and he’d say, well, you could do it that way and then he might sketch something out and give me a couple pointers or ideas. It was a great way to do it, dive in and get as far as you can.”

Harold said of his family’s history, “The legend is that the first boat in Essex was built by a Burnham in the garret of his house. The Burnham’s got here in about 1635 and they probably built boats right after they got here. By 1668 there was a guy named Lieutenant John Burnham who was in the Pequot War, which was not really a war, it was a massacre. He was granted 40 acres for his role in that war. He set up a sawmill on the Chebacco River and started building boats. Here we are almost 400 years later. I know who my grandfather’s father was, that was O. P. and his father was Oliver. Oliver built boats and lived in this house. He had four wives and four mothers and between the eight women they had 39 children. I sit in this house sometimes and I think oh my god, I was married once and she left and how hard was that. I can’t imagine going through that four times in a row. Then I think it might have been Michael and Wesley, but there might be another Oliver in there. O. P. was Oliver Perry Burnham and my grandfather was Harold Oliver Burnham, my father was Charles Oliver Burnham, and I am Harold Anthony Burnham. Then across the street, I think Parker Burnham was related to Wesley, that is a different line. If you aren’t a Burnham, you were either an Andrews or Perkins or a Story. I often wonder whether boat building is an honor and tradition, or it might be a curse.”

Harold’s father, Charles, worked at Mass General Hospital in Boston as a research engineer and spent most of his time developing the PET scan. Harold added, “I think he enjoyed it because he’d go in five days a week and it was always challenging him. There were sometimes I remember when we were kids and he’d say if we don’t get this grant then I don’t know what we are going to eat. I didn’t know what he meant at the time and now I know exactly what he meant. He was in a very small group of people that took that technology and made it what it is today.

Now, Charles worked with radioactive materials and this came in lead containers. Harold said, “We laugh about ARDELLE’s 9,000 pound outside ballast keel that he carried it home in his briefcase.”

Harold’s father also had a passion for building boats. Harold said, “He built MARIA, which is out there in the yard, in 1971 and in the fall of ’72 he started RESOLUTE. He sold MARIA, gave my mother the money, and said you should go to Greece and visit your relatives. She went to Greece to visit her relatives. Ted and I were really young and when we came back after picking up my mother, she saw he had the whole yard filled with wood again. It was a pretty hot evening as I remember. Actually, we had to put the planks on the RESOLUTE chard side out. She did let him finish the boat and we never heard of any discussion of it later, but he never built a new boat after that, just built small tenders.”

Harold would help his father. He assisted in building the barn and working on the boats. Mary Kay explained, “He kept them in business when they were in middle school. They started the Salt Marsh Dory Company, he designed the little dory, which looks a lot like a Gloucester Gull, but it is a little better for this marsh.” Harold added, “My sister (Debbie) did the books, my brother and I built the boats and…It was really a wonderful thing my father did for us because he wasn’t a businessperson but he had us file our taxes from the time we were 12 years old and show what we made.”

Over the years they built over 50 of these dories. Harold added that three of them were lost when they were cruising the Maine coast, but fortunately one came back. The pinkie schooner ARDELLE, Harold sails out of Gloucester in the summers has two of them nested on deck. Harold did warn, “They fit the description tender though, you step on the side of them the wrong way and they will roll right over. The thing that I like about them is you can row upwind against a 25 or 35 knot northwester with higher gusts and get out to a boat on a mooring in a pinch. You have to be careful not to sink it but if you are careful, the boat will go out in conditions that would terrify anybody and it will get you there.”

Harold also rebuilt several Beetle Cats when he was attending Massachusetts Maritime Academy. Once rebuilt he would sell them.

Harold graduated from Mass Maritime in 1989 and went shipping as a deckie for the next five years. “I was lucky when I went to Mass Maritime,” said Harold, “the kids before my class were having an incredible hard time getting into Mass Maritime. There were very few spaces in the early 80s. When I got in 185 people applied and 185 accepted. A lot of things in life is just luck. The sad thing was the guys that were graduating when I was going in, they couldn’t buy a job. When I got out things were picking up and I was able to get a third mates’ job right away.

Harold began sailing for the McCormick lines on what he termed a ‘stick ship,’ which meant she had masts and booms for loading containers. This ship was also a RO-RO with a ramp on the stern. The U. S. Government would buy this ship and build a house behind the house and added a helicopter deck on the bow. The government used her as a helicopter support ship, which carried about 180 Marines. They would load containers and these containers were workshops or carried parts for the helicopters. The merchant mariners on board, like Harold, would move the ship to where she was needed.

Harold was only on for six or eight weeks before going on VLCC tankers. These tankers were 1,100-feet long, 178 feet beam, drew 68 feet when loaded and displaced 265,000 tons. Harold sailed to Kuwait, Saudi Arabia, Egypt, Singapore, Korea, and Gibraltar. He said, “It was a great ship for a young person to be on because it wasn’t about what the ship was supposed to do, it was what it could do. We used to call the pipelines the sprinkler systems but it was kind of horrible to think back from an environmental point of view of what we did. Some of the environmental stuff got so far out of hand that is why I didn’t go back with that company.

As Harold was visiting the different ports around the world he would go out and look at the native boats. He would look at their design and how they were built. He visited ship and boat yards when possible and learned a lot of different techniques by watching. One thing he noticed was that we push a plane where they pull it. They also use a hatchet more than we do.

Harold’s next ship was the helicopter support ship WRIGHT owned by MARAD. He said, “I got on in Norfolk when she was in a dry dock. We launched it and had to do a sea trial. When I got back from the sea trial that was supposed to be the end of my job, but we got orders to go to Boston to the Fore River Shipyard. We were in the dry dock and they changed the propeller and did a bunch of work to the ship. So, we did the sea trial and it turned out the Marines and MARAD were having a fight about what was supposed to happen with the ship. We then got orders from Boston to go to Ceuta, Spain and take fuel which we did and when we got there they sent us to La Verna, Italy to pick up a military cargo which we transferred to Tayakadin, Turkey. It went from Tayakadin to Saudi Arabia and then we wound up in Singapore. Then we went from there to the west coast to Oakland, spent the week unloading and then we went through the Panama Canal back to Boston. It was really a great experience. Then I did another couple years on a small MSC charter tanker that went from Korea to Japan and a few other ports. If you get off of a VLCC and you get on 400-foot tanker it is like climbing out of a tractor trailer truck and getting on a moped. I got to work with a lot of really great multi-national people on the ships. I worked with Filipinos, Greeks and Syrians who were all amazing seamen. I felt really ignorant not knowing their language, but they knew that I appreciated what they did.”

When Harold’s son was born, he swallowed the anchor and came ashore in 1994. The way things were going at the time Harold realized he could be home with his family and make more money building boats. He lived on the other side of town and looked hard for boat work, whether it was on a commercial vessel or a yacht. When Brad Story was busy, he would send Harold a job or two. Most of the work was repairing, trying to keep an old boat afloat.”

If you make your way to Gloucester, take a sail on board ARDELLE, and meet a boatbuilder/captain from Essex. Harold is helping keep the wooden boatbuilding tradition and classic sailing vessels alive for future generations to cherish for years to come.