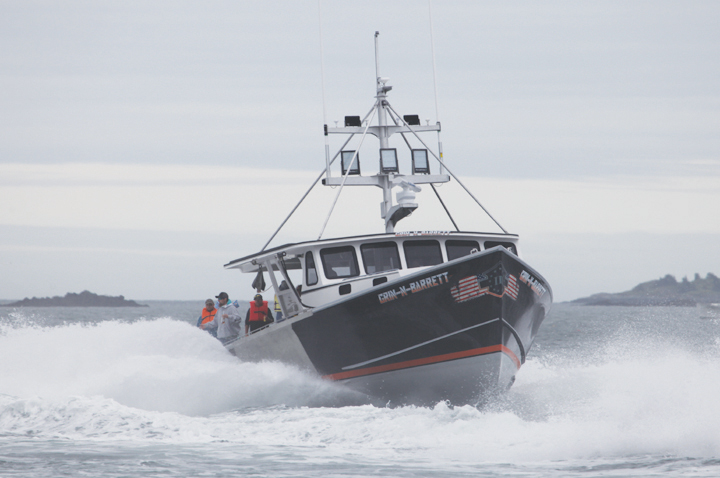 Just launched from Boricua Custom Boats in Steuben was this Osmond 44, finished out as a commercial fishing vessel for Dean Barrett of Sullivan. 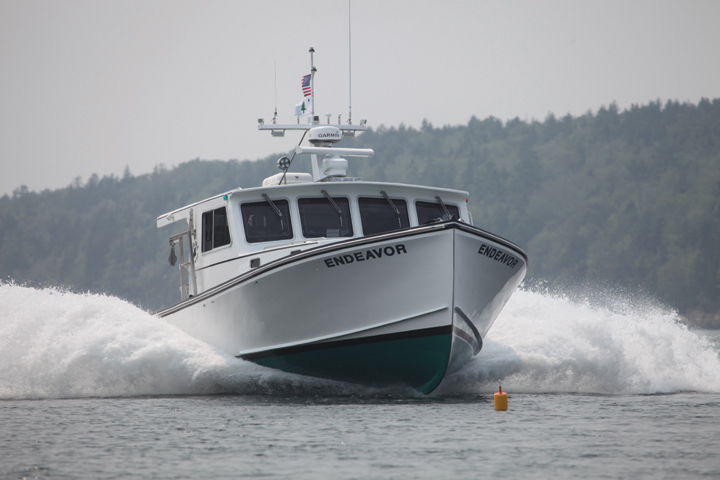 The newest patrol boat for the Maine Marine Patrol, ENDEAVOR, [Calvin Beal 42; 800-hp MAN] was finished off by Farrin’s Boat Shop of Walpole and launched mid-July.

Getting a boat launched on the date promised is always a challenge, but it has been extremely difficult over the year. This is due to the fact that you cannot get some of the materials or items easily. Most times when you call for an item you are told it will be several months before you can have it. Boatbuilders have struggled, but overall they have persevered and the boats are just a few weeks behind schedule.

Another issue has been the cost of materials and items, which has sky-rocketed with the demand from the public during the pandemic. Some of the prices have started to fall, but most feel they will never drop all the way back to where they were before the pandemic hit. Cost will be a factor for the pleasure boaters, but the commercial fishermen will have to grin and bare it or do it themselves, which many do anyway.

Couple all this with how busy yards and builders are during the summer months and you better pray that you do not need to have a major project done between now and September. Some yards might be able to squeeze a project in, but remember you can always get bumped if a commercial fisherman needs an immediate repair. That is his livelihood and the way it should be. So, I, like you, just hope really hard that everything stays working.

Just before the fourth of July they launched the 44-foot GRIN-N-BARRETT for Dean Barrett of Sullivan, which made an appearance at the Moosabec Lobster Boat Races on 3 July. She was an Osmond 47 cut down to 44 feet with an 18-foot 2-inch beam all done by her hull builder H & H Marine of Steuben. This was the first one that they have done this to. She is powered with a 1,000-hp MAN, which allows her to cruise at 27 knots. Down below she has four bunks and a hydraulic locker.

Now in the shop is a Mussel Ridge 46, which is being finished off as a sportfisherman for a customer from Texas. Most of everything under the platform has been completed and now they are installing several items (compressors, water chest for the live well, chill plate, water heater, etc.) before they put down the platform. They are also working down below and inside the house. The house was a project as they lengthened it to 17-feet 2-inches and strengthened, since it will have a mast and a 30-foot green stick. This took about a week to do.

Moises Ortiz said that he has not installed some of these items before so he is paying special attention to make sure that everything will work properly.

When asked when she will be done, he said, ‘yesterday.’ He is hoping for an end of summer launch and that depends on getting everything he needs in a timely fashion.

In the next bay they have a boat from Winter Harbor, which is in for just paint. Moises said that she should be done in a few of days and then he is going to focus only on the Mussel Ridge 46.

When I asked Peter Buxton, owner of Buxton Boats, how rebuilding SACHEM was going he said, “Repairing an old boat is like building a new one with the old boat in the way.”

SACHEM, a former wooden lobster boat built in 1933, is back in the shop. Peter replaced the keel last fall and in the spring he replaced the stern post, horn timber and spliced new ends on the frames he had to cut to remove the keel. With the new ends in place he fashioned a little floor timber that fit over the old frame and its new end and screwed them both together. Peter is now working on the engine beds, which need to be stiffened up. This boat had a Chrysler slant six and this will be replaced with a 4-cylinder Yanmar with about the same horsepower. There is an issue though, this engine is wider than the one she is replacing and that means it will be a little harder to get to the front of the engine to work on it. When he added the new keel he made her a little deeper so she can swing a bigger propeller if needed. He then said that he is going to replank her bottom since she is iron fastened. The planking is good, but one knows that it is only a matter of time before there is a problem with the iron fastenings. When asked if the planking was original, Peter said, he did not think so. He said back in the early ‘60s she was laying on her side in a field, before being saved. He also said she had a lot of work done since then. He is hoping to have her finished and in the water next spring.

This winter he will be working on a Mackinen built lobster boat for a customer from Brooklin. She needs repairs made to the platform. The boat is in pretty good shape otherwise and the gas engine looks like new. Peter also was contacted by the owner of the oyster sloop and he felt that he is ready to do the next phase on her.

Just moved out of the shop and ready for the water is the newest patrol boat for the Maine Marine Patrol, named ENDEAVOR. She, a Calvin Beal 42 hull and top, arrived at the shop the end of last summer. A major modification was made to the top as they raised it 8-inches so they could get the engine under the deck and headroom in the cabin. For accommodations she has a queen-sized berth forward, water tank, wet locker, head and small galley with refrigerator, microwave, sink with cold water only. The engine is an 800-hp MAN with a ZF 500-1A 2:1 gear to a 2½-inch and a ZF 33 x 39-inch left hand four blade propeller. She went over mid-July and at sea trials everything was working fine and she attained a cruising speed of 25 knots.

In the forward bay at the shop is a Wayne Beal 36 being finished out as a yacht for a customer from the West Coast. With the State boat complete and gone the whole crew will now work on getting this one finished up and out the door, hopefully by the end of September. She is about 75 percent complete and most of the work comprises wood trim, systems and cosmetics.

Next could be a Mussel Ridge 46 sportfisherman heading to California; a Mussel Ridge 42 sportfisherman for Cape May, New Jersey and they have a couple of repowers on the schedule. One of the repowers is on a Holland 38, which they finished about 17 years ago. She is presently powered with a QSM 11 Cummins, but is switching to a 700-hp Scania.

The owner of the Robert Rich built boat being totally rebuilt suffered a medical issue and unfortunately will not be able to use the boat so she is now for sale. Fortunately, the project is still going forward. The trunk cabin and house are on and they are working on the interior. Down below they are putting in the berths, head and shower and the master cabin. The owner planned on putting a high-tech solar system with lithium ion batteries in and this is still the plan. They are hoping to have her far enough along that she can go over this fall for sea trials.

Besides the big rebuild, they finished off a 15-foot pram and a Little Crab, both Doug Hylan designs, and a partially finished Haven 12½ for a customer who started the build.

Most of the spring was spent getting the storage fleet, about 35 wooden boats, ready for the water. This meant lots of paint and varnish, rigging, along with some repair work. They stored a number of the Castine Class sloops and they will be back this winter, with may be a couple more. Ellery Brown said towing them over in strings of four this spring was an adventure. They also have a new customer coming with a Folk Boat for storage this winter.

Once the rebuild is done they will start work on a 26-footer to Doug’s design, which will be completed for next season. They might need a little more work to fill out the schedule, but they are not worried as one or two of the storage boats might need more work then expected.

Sabre Yachts has a long history of success with models between 40 and 45 feet, beginning in 1987 with the first Sabre 42 sailboat. Since that date, Sabre has built more than 660 boats in this size range across fifteen different sail and power models. Today, they add another: the Sabre 43 Salon Express.

Designed as a direct replacement for the recently-retired Sabre 42 Salon Express, the new Sabre 43 draws appreciably from the best points of her older sister while incorporating significant technological innovations and answering some of the frequently-noted needs of boats this size. In addition, owners will appreciate her contemporary approach to Downeast proportions, with sweeping lines and fresh angles contained in a vessel that, nevertheless, remains recognizably a Sabre.

Highlights of this blank-sheet design include a spacious salon with two banks of seating over six feet in length and a half-up galley that incorporates all the amenities of a modern kitchen without wasting precious storage volume. Below deck, a versatile hybrid lounge functions as guest berth, private retreat, or home office, depending on her owners’ needs. Her master stateroom is iconic Sabre, featuring an island berth and numerous storage compartments, all in warm American cherry. Finally, an adaptable utility room beneath the salon sole provides space for various supplemental storage and appliance solutions, including a side-by-side washer and dryer, wine cooler, or storage lockers.

Beneath her classic appearance, owners will discover the technology and features of a much larger yacht. The new 43 Salon Express will be the first full-network Sabre below 58-feet. As a result, owners can not only check critical functions and control any circuit on the boat from either the helm MFDs or iPad mini but also control the “mode of operation” or “scene” – setting the lighting and circuit configuration of the boat with the simple touch of a button. Remote access to these components, as well as GPS monitoring, geofencing, trip logging, and NMEA 2000-based alarms, are available via cell phone through the included Sentinel Telematics feature.

The Sabre 43 Salon Express boasts expansive fixed-glazed windows, sloping deck rails, and a sleek new mast design, all of which contribute to her striking nouveau-vintage silhouette. Described as “the most social Sabre to date,” the arrangement of the Sabre 43 encourages connection through circular seating configurations in the cockpit, salon, and lower lounge. While she remains true to her Downeast heritage, this new model refuses to stint on modernization and innovation, marking a new generation of Sabre yacht design.

The first Sabre 43 Salon Express will be completed late in the Spring of 2022.

Each month WoodenBoat School Director Rich Hilsinger hosts a new video episode you can stream from the comfort of your home. The Mastering Skills with the WoodenBoat School series covers a variety of topics pertaining to traditional small boats, their construction, and crafts. You’ll learn from seasoned boatbuilders Greg Rossel, Eric Dow, and Milo Stanley.

Throughout the year, Rich and company will bring you helpful tips, techniques, and various approaches to building a small wooden boat with your own hands, as well as other woodworking projects. Topics include reading and understanding boat plans, laying out and cutting a stem rabbet, steambending frames, spiling planks, wooden spar construction, scarph joints, interior joinerwork, building half models, and lots more.