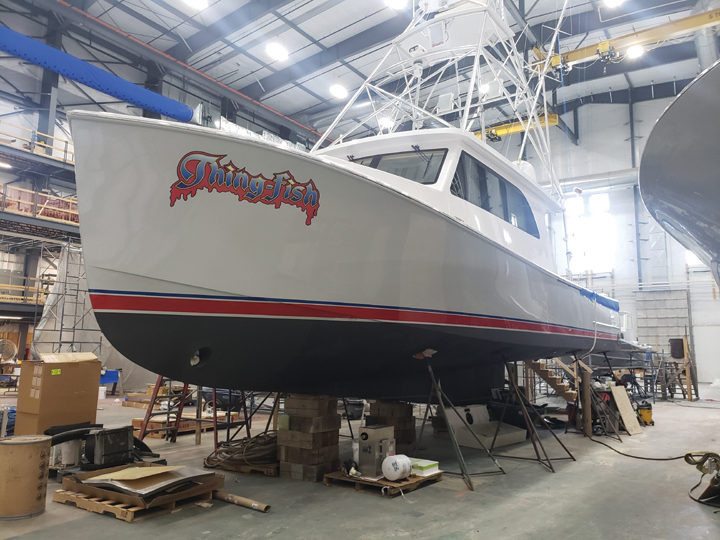 This is THINGFISH, a Mussel Ridge 42 sportfisherman, getting several upgrades at Front Street Shipyard in Belfast. 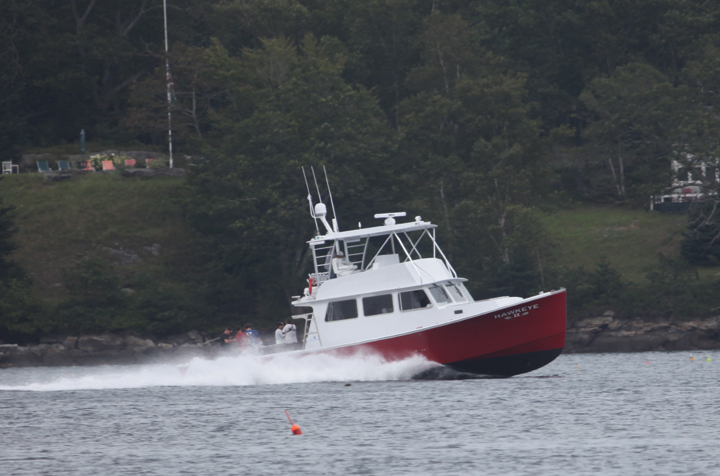 This is HAWKEYE II, a Mussel Ridge 46, finished out as a sportfisherman for a customer in New York by Samoset Boat Works of Boothbay.

There was no question that being busy was an understatement.

The waterjet is up and running and the work from numerous Maine companies is piling up. They have been working with architects and boatbuilders cutting all kinds of interesting items. They are working with one company who builds fiberglass panels, but they cannot cut angles and the waterjet can. I thought this would move to its own building, but JB Turner, who heads the yard, said no. Adding that it had been bolted to the floor and a large garage door had been added to allow easy access. They presently are mostly doing in-state work, but because this is the biggest waterjet in New England, one can bet companies south of our border will be coming soon.

At the yard are a number of Nordhavns. In the paint bay is the 55-foot MARRY ME having her hull painted and they just completed painting the hull of the 96-foot MACGUFFIN. The 76-foot TRIXIE was in for general maintenance.

PRINCESS KHLOE, a 76-foot Leopard catamaran is in for a full paint, top to bottom, which they are readying for the paint bay.

Just out of the paint bay was the 60-foot MISCHIEF, which is also getting a new keel, rudder and interior upgrades. JB also said that he had just met with someone that could machine a new bulb for her.

THING FISH, Mussel Ridge 46 sportfisherman, which was just finished, is in to have a larger generator installed, turn the live well tanks into fuel tanks for more fuel capacity and numerous other small changes.

J SEAS, a 50-foot sportfisherman from the Cape, is in for new engines. These are being installed and she will be heading south mid-fall.

The Holland 30, which will be powered with an outboard, is nearing completion. She should be over mid-September.

They are also building a Hunt 41. The hull is done and they are now working on the interior. The deck is scheduled to be started the middle of September. This boat is due to be launched early next spring.

The Deerfoot 62 will be delivered this fall after being totally refurbished.

This summer there were a number of transient boats coming in, many having found the bottom. Presently there are two sitting in the yard waiting for fiberglass repairs. The problem is the fiberglass workers are booked solid in Bucksport building new hulls for Holland, SW Boat Works, Sargent, Brackett and Pro-Glide.

MINNOW, a Doggersbank 82, may be coming back this fall for hull plating work. The also expect to see the 92-foot First Flight sailboat, which needs maintenance work. The Nordhavn BLOSSOM will be coming in for solar panels. A Gunboat 48 has arrived and she will be getting new generators, solar panels, bow thruster and other work.

The 126-foot steam yacht CANGARDA’s owner, who summered on Islesboro, passed away in July and she is hauled up at the yard and is for sale.

As for storage they are getting two to four calls a day, but they are booked solid.

Some interesting news is that they wanted to put solar panels on the roof of their new building, but CMP did not have the capability to handle it. However their property in northern Belfast operates off a different sub-station so they will be putting 743 solar panels up there. This is expected to cover about 40 to 50 percent of their electrical use per year.

In the centre bay they are finishing out a Morgan Bay 43 as a Coast Guard certified charter boat for a customer from Montauk, New York. Her accommodations include a V-berth, quarter berth on the port side, and a freezer. In the main cabin is a settee, small galley and a head, which is accessed from the cockpit. She is powered with a 750-hp John Deere diesel. She is about 80 percent complete with trim and final system hooks ups to do. She will be finished mid-Fall, but will probably not be launched until next spring.

In the next bay is another Morgan Bay 43, which was finished out as a sportfisherman for a customer from Connecticut. She is in to have the angle of her lower spray rails changed and some other minor upgrades.

The Morgan Bay 43 is an excellent design. She is slippery in the water, a good sea boat and can be used as a commercial, sportfish or pleasure boat. However, they have a new design coming. The Morgan Bay 47 plug is coming along at Penobscot. The lines are based on the 43 and they are going to raise the sheer 6 inches and widen her slightly above the waterline. The top will be totally redesigned and a new mould made. The trunk will be longer and the windshield will be moved back three or more feet. When finished as a sportsboat she will have stateroom forward and another to starboard with a head and enclosed shower to port. Up in the shelter is a settee and galley. They already have one sold with several other people very interested.

There was a bare hull sitting outside for several months, but this was sold and is being finished off in New York. This finisher is looking to do another 43 when this one is completed.

Just launched was Mussel Ridge 46, HAWKEYE II, they have been finishing off as a sportfishman for a customer from New York. She is powered with C-18 1000-hp Caterpillar diesel, with a Twin Disc 2.04:1 gear, 3-inch shaft and a ZF variable pitch 34 x 32-inch propeller. For accommodations she has an owner’s stateroom forward, bunks to starboard, with a head and enclosed shower to port. Up in the shelter the galley and settee are on the port side with helm and sofa/bunk to starboard. The interior is finished off in Flatten Matterhorn white and trimmed in Sepo. The cabin sole is done with rubber decking by AquaTraction from Minnesota. Under the platform there are three fuel tanks for a total of about 900-gallons. There are also a two fish holds, one that would hold three giant tunas; and a 150-gallon live well. Out in the cockpit there is a hauler, a 70-gallon live well, hydraulic bandit reel, about 30 rod-holders; tuna door and a 41-foot greenstick.

They are now installing trim tabs, raising the waterline and a couple of other minor additions and she should be done and gone by the end of the month.

Presently in the shop is a Mussel Ridge 28, which is being finished off as a fancy lobster boat. They have the shaft tube and forward cabin built, with everything else mocked up ready to go in. She is scheduled to be done by 1 February.

Just moved into the big bay is a Mussel Ridge 42, which is being finished out as a splitwheel lobster for a fisherman from Sedgwick. She will be powered with D-13 700-hp Scania with ZF 500 gear. For accommodations she has V-berth, hydraulic and electronics locker. Under the platform she will have tankage for crates and a rope locker. She will be done by next summer.

Just moved into the left bay was a Mussel Ridge 42 hull, which is being finished out as a lobster boat for a fisherman from Lamoine. She will be a basic boat with a custom top. Accommodations will include a berth and some cabinets, split wheelhouse, lobster tank under the platform and a rope locker. She is powered with a 1,000-hp FPT diesel. They expect to have her finished sometime late winter or early spring.

Sargent’s recently launched a Dixon 45 (18½-foot beam) split wheelhouse lobster boat for a fisherman from Swan’s Island. For accommodations she has double berths forward, cabinets and storage compartments. There are three lobster tanks under the platform, which holds 40 crates. For power she sports an 800-hp V8 MAN, which gives her a top speed of 21 knots and cruise at 16½ knots. Joe Sargent said that the owner is extremely pleased having used the boat every day since she was delivered.

What is next? They have some 23s being laid up to finish off this winter and there is a Duffy 35, the first boat Joe finished off when he started the business back in 1999, coming in to be lengthened three or four feet. Then outside there is a Calvin Beal 38 that will be coming in for a complete refit. They will be stripping her down to the base hull and finish her off as a basic pleasure/sportfisherman.