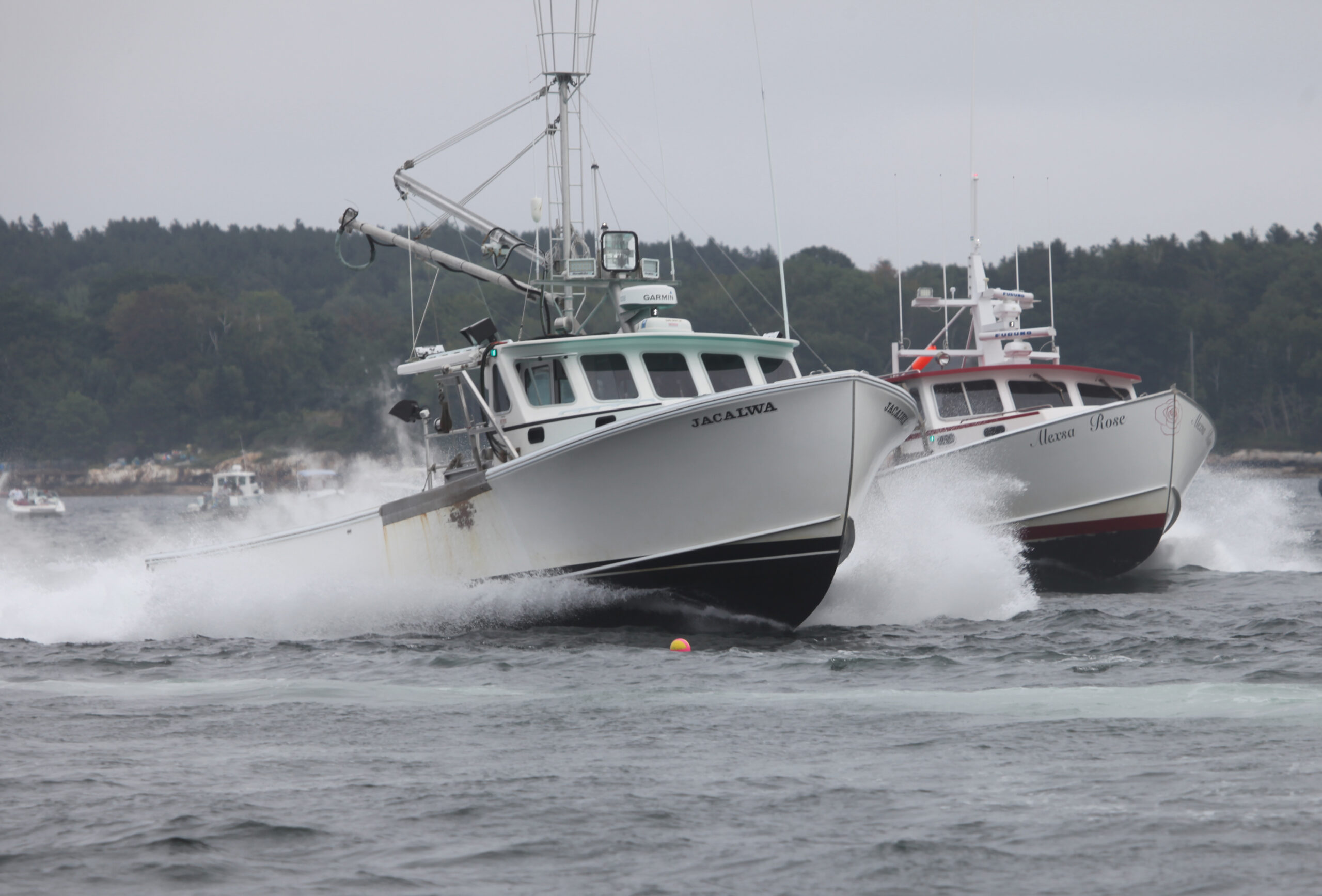 Again, we were watching the weather as the forecast was for the remnants of a hurricane to hit us sometime on Sunday. They said that we were going to get some wind and rain and this would make the trip to and from the races not much fun, especially for those coming from Penobscot Bay and beyond.

I arrived on Long Island Friday for the Saturday races there. Friday evening there is a gathering at the Ferry dock and that is when I got to see the famous 2,350-hp turbo prop engine, which Steve Johnson is going to put into the Crowley-Beal 33 WILD ONE, owned by Scott Wood. They said that they had a real mechanic hooking up the wiring harness, but that it would not be running until next spring. When asked who was going to run her on her first sea trial Steve pointed to Scott, who at the same time pointed to Steve. This is going to be interesting!

It was foggy first thing in the morning on Saturday, but cleared mid-morning. As we were signing up the breeze began to pick up. Sign ups were steady and when done we had 46 entrants. When we made our way out to the committee boat, I consulted with Dave Johnston in the start boat about the conditions. We decided to shorten the course for the Work Boat classes as neither of us wanted to see anyone flip. Other than that, the weather was not a factor, however, there were some great battles to come.

There were four boats on the line for Work Boat Class A (Skiffs 16 feet and under, Outboards up to 30 hp, operators up to 18 years old), which has been dominated by JENILY [Corson 14; 30-hp Johnson], Jennifer and Emily Noyes of Harpswell and today was no different as they lead the other three to the finish line. Next over was WHALER [Boston Whaler 13; 20-hp], Max Byers of Long Island, followed by CAROLINA [Carolina Skiff; 20-hp], Miles Johnson of Long Island and EASTPORT LAUNCH [Eastporter 22; 25-hp], Jack Spear of Yarmouth. In Class B (Inboard, Outboard or Outdrive, 31 to 90 hp) ZIPPIN’ TOO [Corson 15; 90-hp Nissan], Jacob Noyes, brother to the winners of Class A, has been the boat to beat, but he was up against Andy Correa of Mere Point in his Boston Whaler. ZIPPIN’ [Corson 14; 60-hp Johnson], David Noyes of Harpswell and Andy Correa’s Boston Whaler were battling it out in the middle of the course, but sneaking up the right side of the course and coming across the finish line first was ZIPPIN’ TOO. There were three boats in Class C (Inboard, Outboard or Outdrive, 90 hp and over) and after changing his propeller after a devastating defeat at Pemaquid Dave Johnston of Peaks Island in CASCO MISS [Eastern 22, 250-hp Honda] found enough speed to stay out in front for the win. Second went to DELUSIONAL [Corson 18; 225-hp Evinrude], Ron Pottle of Brunswick and third was GULL [Webber’s Cove 22; 150-hp Mercury], Marshall Spear of Yarmouth.

There were four boats signed up for the five Gasoline Classes and two of them were in Class D (V8, 376 to 540 cid, 24 feet and over (Non-working racer)): FOOLISH PLEASURE [30’ Custom Riley Beal; 650-hp 455 Stroker], Mark Freeman of York and VOOP [Duffy 30; 502 Chevrolet] Jeremy Saxton of Harpswell. There were no entrants in Class B (Up to 375 cid, 24 feet and over) and Class C (V8, 376 to 525 cid, 24 feet and over). BLACK DIAMOND [Holland 32, 454 Chevrolet], Lindsay Durkee of Islesboro, would have come, but the day before it was discovered that there may be an engine issue and decided not to chance a bigger problem and a very long tow. There was one entrant in Class A (Four and Six Cylinder, 24 feet and over), ALL DAY LONG [Johnson 28; V-6 Gas], Tim Dyer and one, DOWNEAST NIGHTMARE [Mussel Ridge 28; 1,000-hp Chevrolet], Mark Davis of Orr’s Island, in Class E (V8, Over 525 cid, 28 feet and over, Turbos/superchargers). They all ran up together led by DOWNEAST NIGHTMARE. Next over and winner of Class D was FOOLISH PLEASURE with VOOP right on her stern.

There was just one boat in Wooden Boat A, which was GRASSHOPPER and she raced down with the two boats in Wooden Boat B. GRASSHOPPER crossed the line first, but who was getting first in B? It was close, but SAND DOLLARS III [41’Johns Bay Boat; 700-hp Caterpillar] Scott Dugas of Yarmouth took it and DELUSIONAL got second.

The two biggest races of the day were for the two boat yard races. The first was Boats Built by Johnson’s Boat Yard, which was easily won by CASCO MISS with LYNN MARIE second. In the Royal River Boat Yard Race JACALWA captured first with SEA FEVER second.

In the Gasoline Free-for-All DOWNEAST NIGHTMARE led the way to the finish with FOOLISH PLEASURE second and VOOP third.

Now came the Diesel Free-for-All and all eyes were on the two lead boats as the blasted their way up the course side by side, but this time the win went to BLUE EYED GIRL, with MARIA’S NIGHTMARE second and GOLD DIGGER third.

The Saturday reports from the weather forecasters were calling for the tropical storm to strike the Portland area about mid-day on Sunday. When we concluded the races at Long Island some decided to head home and a few left the following morning. Sunday morning there was fog, but that lifted, but the skies remained threatening. The new forecast was calling for the storm to go inland, wind about 15 knots with rain starting early in the afternoon.

The Portland races raise funds for scholarships for students of fishermen via the Maine Fishermen’s Forum. There was a well-attended gathering at the Island Lobster Company on Peak’s Island on Saturday evening, which netted a lot for the cause. However, the weather forecast chased most of the potential racers away for Sunday’s race and when the sign-ups were done there was just 19 boats entered.

There were only two boats in the Work Boat Classes so they came down together. CASCO MISS would win Class C and Andy Correa’s Boston Whaler, who went air borne several times in the race to reduce drag, won Class B.

There were just two boats in the Gasoline Classes, all in Class D and the win went to FOOLISH PLEASURE. Getting second was FUELISH DECISION [General Marine 26; 425-hp (502) Chevrolet], Keith Ivers.

The Diesel Classes were up next and there were no entrants in Classes D, G, H, I, J, L and O. There were several others with just one entrant and they were combined with another class. Three boats were on the line for Class A and showing the way to the finish was LYNN MARIE. Second went to RELENTLESS [BHM 28; 200-hp Yanmar], Scott Dyer of Westbrook and third was GRAMMIE ANNIE [Frank Day, 1980; 119-hp John Deere], John Carroll. There was just one boat in Class B, LIL MORE TAIL [Calvin Beal 33; 225-hp], Kurt Brown and she ran down with the one entrant in Class C, MISS ATTITUDE. There were two entrants in Class E and the win went to AUDREY MAY, who after finishing headed for home, which was going to be a long ride all the way back to Islesboro. Second went to EXCAVATOR [Harris 28; 370-hp Cummins], Ed Apon. The winner of Class F was BLUE DOLPHIN II. MARIA’S NIGHTMARE stayed, but unfortunately BLUE EYED GIRL did not return, so MARIA’S NIGHTMARE the only entrant in Class K got the win. There were three boats in Class M(A), two in M(B) and one in N and they were run together. As they neared the finish line the leaders were JACALWA and ALEXSA ROSE and it was close, but JACALWA gained separation and slid over first for the win in Class N with ALEXSA ROSE getting the win in Class M(B). Next over was TEMPTATION, which took second in Class M(B). OLD SCHOOL was next over and she was the winner of Class M(A). The next two over, PULL N’ PRAY and NEW LEDGE [Stanley 44; 304-hp 871 Detroit], Parker Poole of Falmouth. NEW LEDGE spent more than a year at Royal River Boat Yard being totally refurbished and looked incredible running up the course.

The winner of Wooden Boat A was GRAMMIE ANNIE and in Wooden Boat B the win went to SAND DOLLARS II.

There were five boats on the line for the Diesel Free-for-All and no one was surprised to see MARIA’S NIGHTMARE II get the win. Second went to ALEXSA ROSE with JACALWA third.

We were down to the final race of the day and year, Fastest Lobster Boat, and just two boats were on the line FOOLISH PLEASURE and MARIA’S NIGHTMARE II. This could be a good, race, but the rough conditions might favour MARIA’S NIGHTMARE and it did as she could slide right through the two foot chop.

Three tugs, ANDREW MCALLISTER, ROWAN MCALLISTER and RODERICK MCALLISTER, came out for the Tugboat Races, which ran on the same course. It is always impressive to see these monsters run the course and Portland is one of the only places still holding tugboat races.

In going over the year end results (find following the Results on Page 22) we must commend FOOLISH PLEASURE, AUDREY MAY and ALEXSA ROSE as they had made every race this year. That is not an easy feat. There is a lot of hours involved in getting to and fro and the conditions can at times be trying, even for those on a trailer. In one case, ALEXSA ROSE, it rewarded them with a tie for first place.

Next up is the Annual Meeting and Awards Banquet at Robinson’s Wharf on Southport Island at 1700 hrs. on 16 October. I do not expect any changes to the classes, but maybe a slight change in the rules. Presently, it takes three races to qualify and we count the best of five races if someone competes more than five times. This opens up the possibility of ties, so the board is recommending that we take the six best finishes. Several racers proposed that we offer a pre-season payment for the races. The question is do we charge for all the races or do you get to choose which ones you want to attend and pay for these before the season starts. Another suggestion was that we have a long distance race, which has been discussed before. There are not many options if tied to the current race schedule unless this is on an off weekend. However, the thought was a Boothbay to Rockland Race, which if we stayed outside would not create any hassles with the finish off the Breakwater at Rockland. Is this a free-for-all or do we have classes? It is all up to the members and what they would like to do.