Setting Up Your Work Bench for Model Building 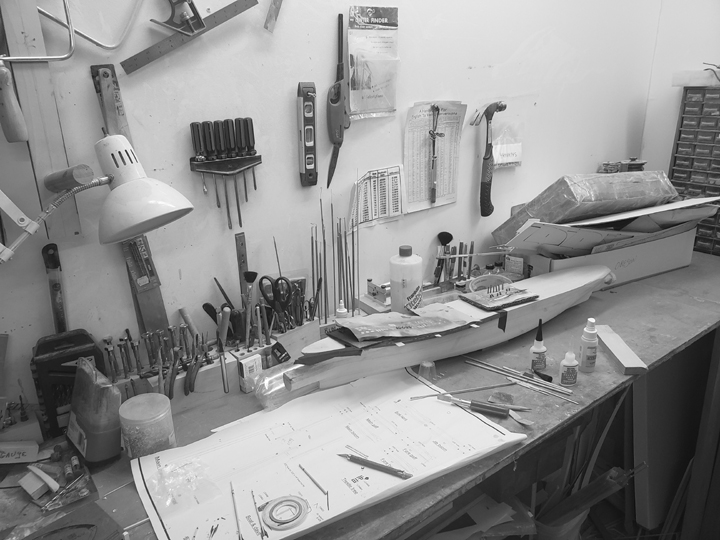 This is Al’s bench where most of the work is done on a model. Note that most of the tools are within arm’s distance.

SEARSPORT – The weather has turned cold and with Christmas just weeks away some are looking for something to do inside out of the elements. You can sit in front of the television and binge watch shows or stare into that evil rectangle and get sucked in by social media or just maybe the spouse has a nice long list they would like to see you do. None of those appeal to me, I want to create something so I decided to build a wooden ship model.

Where do you start? My first thought was setting up my work bench with the tools needed. I am sure we can ask the internet, but it is a lot of fun to ask Al Ross of BlueJacket Shipcrafters in Searsport for his suggestions.

Al began by saying, “If we are starting out, and let’s assume they have no tools whatsoever, a lot of times people will go out and spend hundreds of dollars on stuff they really don’t need. If they start out with a kit, most kits you can build with a small handle with a No. 11 blade, a pin vice, a razor saw, needle nosed pliers, some good tweezers, and diagonal cutters for cutting brass rod. If you are going to do a solid hull model then you are going to need a small block plane, some course rasps and gouges.”

Al added a warning, “If you are going to buy the bigger tools, or even the smaller tools, you don’t want to buy cheap stuff because they won’t take or hold an edge. My gouges for instance, they are English and they run me about $50 apiece but I have had them for 30 years and they are still good.

Make sure your tweezers are good ones. “Like everything else I’ve had them for so many years,” said Al. “They are very good stainless-steel ones that are curiously made in Pakistan. You can buy cheap tweezers but after a while they bend. Some of the workspaces you will need to get right down into a tiny space so you need a nice set of tweezers.

Because the blocks usually come undrilled you will need a drill set. Al added, “If you had a 1/20,000ths to 1/32,000ths drill bits that would cover just about everything unless you are building pond models and then you have to have bigger ones. We have the numbered drills that go from 80, which is about 1/10,000ths up to I think 61. Anything bigger than a 1/16th you can get at the hardware store. Let’s say a model in the 1/8th to the foot scale maybe you will be using 20,000ths for most part.

“A good set of needle files is always nice to have,” continued Al. “You could do pretty much the same with sandpaper as you can with a needle file depending on what you are doing. Normally I go from 60 grit down to 600. I use wet and dry sandpaper. The wet is for sanding after you have primed it 3 or 4 times. For most applications 220 is just fine unless you use Balsa wood which is a four-letter word spelled with five letters.”

Remember this all depends on the model that you have decided to build and “it depends on what you think you can do,” added Al. “If you are literally just starting out, it’s always best to get a relatively inexpensive kit and see if you like it because you can spend all this money on tools, build your first kit and say, oh crap, I don’t like this.”

The most used tool on Al’s bench is the X-Acto knife, for which he buys the blades by the hundreds. Al said, “As long as you change them a lot and you can tell when they start to lose their edge.”

Some of you will want to build a sailing vessel and you will need a good set of tweezers, good vice, a good set of fly-tying scissors. If you get the little cheap scissors, they are no good. If you go to a sporting goods store, they will cost you, but they last. The other thing is only use them for rigging. You could buy some rigging tools, but you can also make them. I have made a lot of my own tools over the years because you look at something and say well, I really don’t want to buy it if I can make it. Basically, some are just a dowel and a piece of brass or aluminum rod bent into certain shapes. The rigging tools really don’t require much of anything. It’s just patience and knowledge.

Painting a model is one of the most important aspects of the building process and to do this right you will need good brushes. Al explained that the cheap brushes will shed hairs and you do not want that to happen. He added, “I don’t brush a lot, I usually spray but the paintbrushes I do have are from an art supply, they are good ones. They are also expensive, but as long as you take care of them, they last.”

If you want the best finish you want to spray and you can buy a nice single action airbrush with all the accessories for $50. You will also need a compressor which is another expense probably about $200. You can use a regular compressor as long as you have got a regulator on it. Al added, “It will give you a lot better finish and for when you screw up, and you do, find that imperfection, sand it out, and spray it. You can adjust the spray on your airbrushes so there is practically nothing coming out of them and you just start spraying really thin coats. If you are good, you can’t tell where the repair is. There are single or double action guns. I have never been comfortable with the double action guns, Again, if you take care of your airbrush, mine is 40-odd years old and works just like the day I bought it.”

Make sure you purchase a good quality one. Al suggested Posh, which is a Japanese company. He also said stay away from the plastic guns because they will clog up.

Glue is not a tool, but you will need a bottle of it. You want CA (cyanoacrylate) and Al suggests that you use medium, which allows you five or six seconds before it sets up. Al stated, “The type depends on what you are doing. If I am gluing up boards to make a block to carve or if I have something I want to take a while making and sure it’s positioned right, just plain old tight bond glue. On rare occasions I use the contact cement. I never use epoxy except more as a paint when I am a carving master on bass wood. I will coat it with West System just because it is hard. The only time I might use an epoxy glue is for doing the radio control boat putting the shaft log in because it is stronger.”

“Don’t be afraid to use whatever works,” said Al. “Some people are very snooty. Unless you are building under a contract for a museum or the military, they have very specific requirements. Remember there are reasonably rationales for using certain things, longevity being one.

Some kits come with tools and they are sufficient for what you have to do. Other models usually list the tools that are needed in the instructions.

BlueJacket Shipcrafters also sends out a monthly newsletter that has building tips.

Now, just find a model to build, a nice table, get the tools and on a cold snowy day start the project.