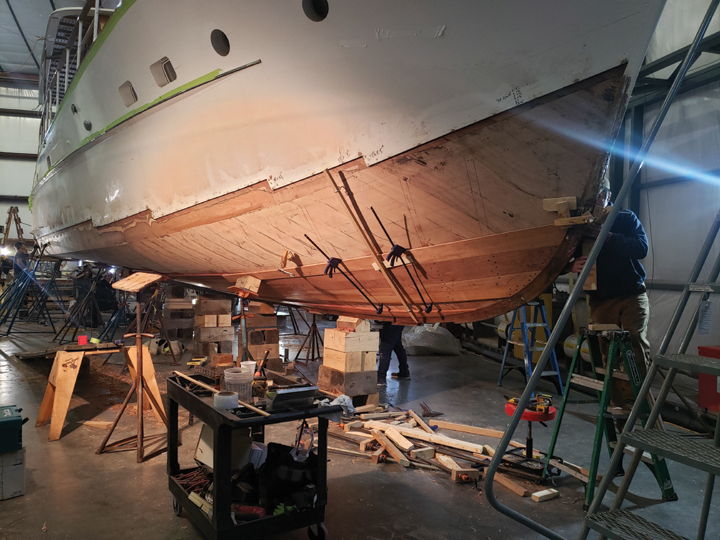 Replacing the bottom on the 55-foot Grebe IROQUOIS at Portland Yacht Service in Portland. 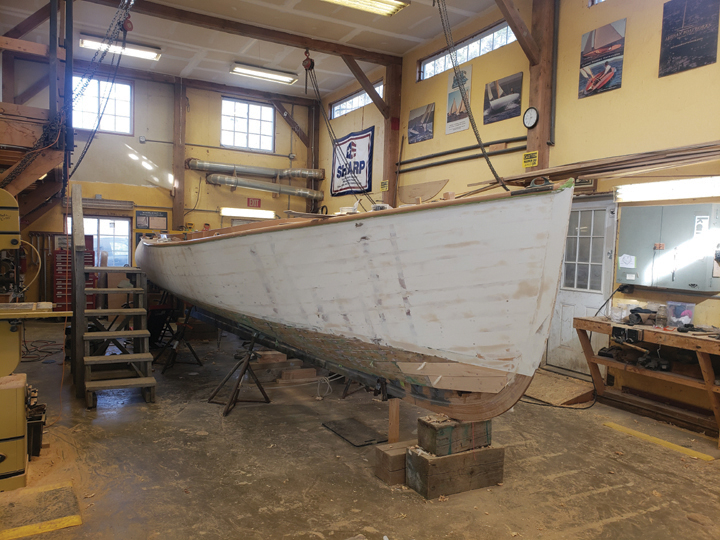 There are always interesting projects underway at this shop. Where can you go a see a Bugatti, especially a Bugatti boat? Alex Brainerd, owner of Artisan Boatworks said, “She is an original Bugatti You-You and the Cliff Notes are that Bugatti was sort of hedging his bets as to who was going to win World War II back in the early 40s and so he bought a little shipyard north of Paris and decided he would sort of supplement his car manufacturing with some boats. He designed this little You-You and You-You is a derogatory French word for a small boat. He built three prototypes in three different sizes and this was the smallest of the three. He put together a bunch of marketing materials and then he died so none of the boats ever went into production and all that exists are these three prototypes.”

For years, this boat sat on the deck of the classic motor yacht ATLANTIDE, which spent summers in Blue Hill. Recently, she was sold and the new owner is having her completely restored by Royal Huisman from Holland. As for the tender she was sent to Artisan to be restored and this meant replacing the entire hull. “When she came to us the whole stem was rotting out all the planks, the seams had been routed out,” said Alec. “So, we took the lines off the original hull and re-lofted it on the floor. Essentially, we built a new hull and once the new hull was planked up and off the moulds, we put the whole original deck frame back in it as a unit. We are re-installing all the original covering boards, seats and coamings so it really will have the soul and appearance of the original when it’s done.”

What was a surprise was that when they peeled the paint off the inside the original Bugatti stamp was in the keel. They cut that out and glued it onto the replacement keel.

This project should be completed by the end of February.

Also, in the shop they are nearing completion on a total rebuild of 26-foot gentlemen’s launch, built by J. O. Brown of North Haven in 1927. She was originally named LINWOOD A. and that name was changed GRAMPUS just before World War II. “We kept the keel,” explained Alec, “but we did this big laminated forefoot. All the frames are new. The horn timber is new as are the floor timbers. It is interesting the way she is framed with short frames coming down from the top and then other ones going up from the bottom. I have never seen it done that way with the alternate pockets in the keel, which are interlocking. It works fine, it’s just labor intensive, basically twice as many frames as you might otherwise. However, it is easy to get them in and out without taking the deck off.”

Presently they are putting in a new Volvo diesel. They also have to put in a couple floor timbers, ceiling and sole. She should also be finished in February.

When she rolls out the door, they have a 30-foot Clinton Crane Idem class scow coming in for a rebuild. Alec added, “We have done a few of these before. It’s an 1899 design and there is a fleet of twelve of these boats that were built in 1900 for a lake up in the Adirondacks, upper St. Regis Lake. Of the thirteen original boats, twelve are of them are still sailing the 13th is in a museum. This will be the be the third one we have restored, so we will have her up there for racing in July.

In another bay off the storage shed they have a fiberglass Alerion that was built in the early 60s. It was the first one of the fiberglass Alerions that Halsey Herreshoff built in Bristol, RI. She is being totally restored and that project will be finished within the month.

As for other work they are building a couple of masts for Alden Indians that races out on Nantucket.

Then there are the storage boats, eighty of them, that will need some degree of work done before they hit the water this spring.

In the shop Bill Wright has two Bridges Point 24s. On the left is hull #36, which Bill thought was built by Pert Lowell of Massachusetts in the 1990s. She had been owned by someone from Virginia and some how she sank at her mooring. He called Bill and offered her to him, but he was not quick enough and that boat was sold to some one in Maine. Bill sold him a new deck and offered advice when asked. However, it was not long before he figured out that this was a major undertaking and offered Bill the boat. Bill purchased it and brought to Mount Desert Island to be restored. The hull is now striped and Bill is starting to put in a very simple interior. This boat already has a new owner. At the end of the summer Bill got a call for someone looking for a new boat and Bill told him about this one. This person lives in Los Angeles, California, but summers he spends off Vinalhaven where she will be kept. Since Bill is the only worker, he does sub out some work, this will keep him busy all winter.

On the other side of the shop is another Bridges Point 24, BLEW ME AWAY, which was launched last June.

In the storage shed he has another Bridges Point 24, which was owned by his father. This needs some cosmetic work, which he hopes to get to soon.

The phone and web inquiries have been coming in. In fact, he has someone interested in a new daysailer, but he knows of one that might come available, which may work out better for the buyer.

As for storage he has a small bay but has rented out the remainder to the John Williams Boat Co. in Hall’s Quarry.

Out in the yard is STUART LITTLE, which was put on hold last winter, but they are back on her again. Mark Hubbard, owner of the yard, said, “We have mostly painting, but we put a new fuel tank in under the engine so I have got to put that back. I’ve got a little bit more to do on the cabin sole which we replaced and some trim.”

Another project this winter will be on FINESTKIND III, which is coming in to have her aft waist replaced. They replaced the forward about five years ago and now the stern needs to be replaced. This boat had a fantastic summer last year and that means she got used hard. Once this aspect is done then she will get her annual maintenance.

Normally they store just over 100 boats, but this year they are at 135. Some yards do not ask customers back unless they spend a specific amount of money with them and one local yard sent them a number of customers due to this. Mark said that he is not looking forward to getting them already for the water since they do not have many employees. They could have had more work, but they turned it away. If you take it on it is easy to get overwhelmed and then no one is happy.

Shop to Shore, South Bristol, ME

In the shop they have a 70-year-old 36 Olsen from Connecticut, which will be undergoing a 40 year rebuild. Even though they have yet to open her up, it was thought it was going to be an extensive project. The garboard plank is starting to let go, so they knew they would be refastening the bottom. The frames had been repaired at some point and the owner did not care how it was done so they need to go in, and that means removing the ceiling, and see just what was done and what needs to be redone. They do know that there are some cracked frames and those will need to be replaced. They also must repair the rot around the sliding windows and top of the house, and then repaint her.

They have a fiberglass power boat coming in, which a couple of years ago they put a new windshield on. She is back for additional work. They will be working on the console, doing interior work, repair the teak deck and doing lots of paint and varnish work.

They store several boats and these are all good for a number of hours of work. One of these boats is a 1949 Chris Craft and they have lots of varnish.

The project that was underway when I stepped into the shop just before Christmas was a very large train table for a Lionel train set. This was nearly complete and would certainly have been ready for Christmas.