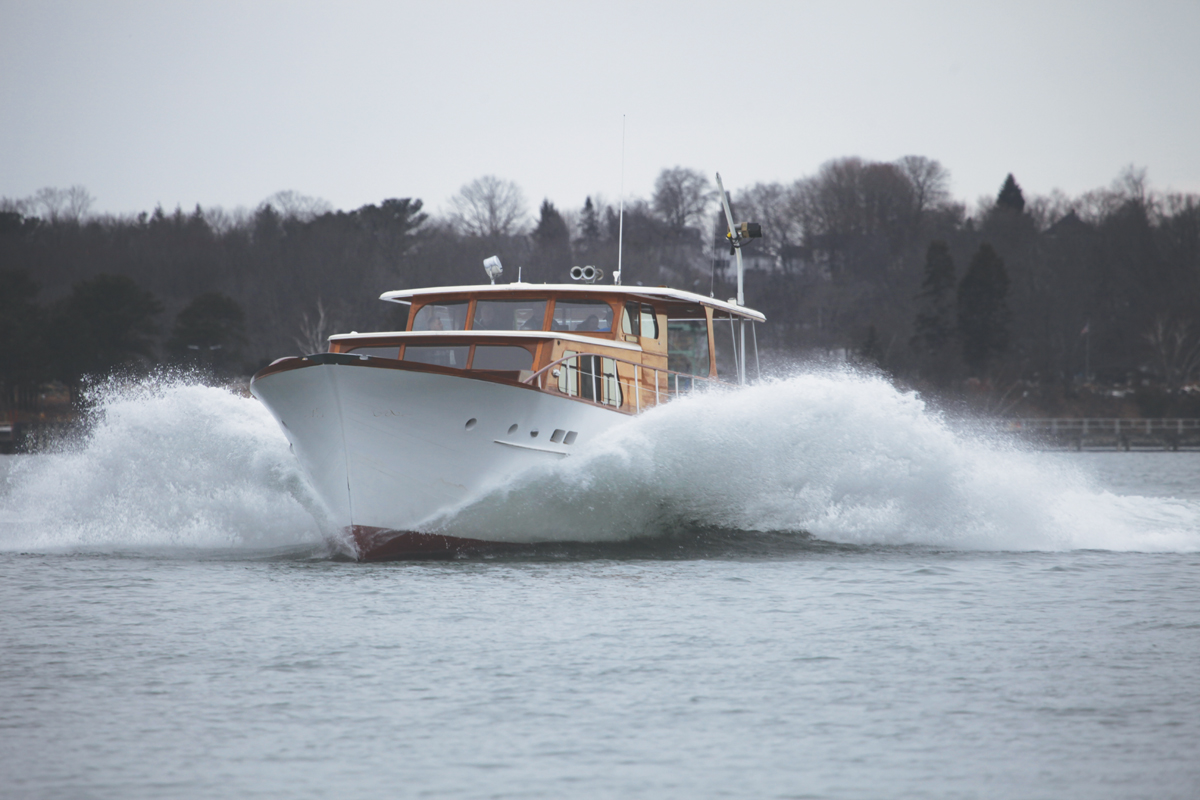 PORTLAND – There are a number of very interesting boatbuilding projects always underway on the coast of Maine. Over the last two years we have been following one in particular, which was taking place on a 55-foot Grebe cabin cruiser IROQUOIS at Portland Yacht Service in Portland.

Yard Manager Brent Sullivan, explained, “The project started with an owner that had an old boat that he wanted to bring back to life. He wanted to put new power plants in and that is where the concept started, that started two falls ago with a long phone call on Sunday afternoon.

“He knew he had some aging Detroits in the boat,” continued Brent, “and he wanted to improve his cruise speed a little bit and knew he had to address the engines. The boat was operational and sitting at his pier in Portland. The Detroits weren’t putting out their original output, but they did start right up for a sea trial. His original goal was to improve his cruise speed, 6 to 8 knots from about 12, up closer to 18 or 19 to justify the repower in his mind.”

During the sea trials they recorded her speed under different conditions and they turned to Accutech to get their thoughts. They replied with what they thought she would need for power and Brent in turn asked for bids from two different engine companies. When the bids returned they decided to go with Casco Bay Diesel and twin 600-hp Cummins, which they figured was the best fit and offered good support.

With the boat out of the water, they removed a few planks. Brent added, “We went into the project under the impression that what we were going to find was a few soft spots but a generally okay. We even believed initially that we were going to be able to use the original engine bed frames with some bulking up. We always understood that there was going to be some improvement, but what really determined it was the general condition of the boat when we started getting into it. That was when I called Richard Stanley because I knew that I was in deep water and I needed somebody with some experience. After some begging I got him to come down on a Saturday to look at it.”

Richard explained, “I came down and looked at it and I could see that she was in really poor condition. She really needed the whole bottom redone, but they only wanted to do part of it. They wanted to be able to save the forward part, and I thought it might be possible but I didn’t really like it. She was under built from here original scantlings by a lot.”

When they opened up the forward section they found broken frames and that is when they had the owner come in and Richard showed him the problems that he was finding. Richard said, “She was fastener sick. She had six fasteners or more in most planks and some just spun, they weren’t holding anything at all. We both convinced the owner you really need to do the whole bottom and he agreed.”

By opening up the entire bottom they were going to be able to address everything that needed to be repaired. At that point they started talking about making the engine grid out of something other than wood. “We have friends at Arc Tech in Cornish and they did a computer scan of the interior of the boat so they could re-create that in their computer. With the model they developed they would come back and talk to Richard and the engine guys and they came up with a concept for the engine beds. When the design was finalized, they sent the drawings out to a company with a waterjet, who produced the marine-grade aluminum pieces that they would weld together to make the engine beds that just dropped into place.

The real project for Richard was replacing the bottom. Richard said, “The main keel is original and that is the only part of her bottom basically that is original. I didn’t replace the forward frames, forward of the engine room, we sistered those. Everything else is taken out and replaced. She was originally planked with diagonal mahogany planking inside that was about ¼-inch thick and then she had a mahogany outside longitudinal planking that was about ¾-inch thick. The inner planking, we put a marine mahogany grade plywood, there was about 5/16-inch thick and then on the outside we used plywood but we cut it into strips and diagonally planked the bow to make the plywood form around the convexed curves. We made that 7/8-inch. We G-flexed the outer planking on to the plywood and we put three bronze screws per plank per frame.”

There was some hope that they could get her over before Christmas, but unfortunately the planking took longer and she did not go over until the middle of January. Brent said, “We had the factory reps from Cummins coming up from New Jersey and they wanted to be here for initial startup. They are pretty demanding on the setup for their engines to keep everything in warranty. The systems team was prepared for them and gave them everything they needed. Within a hour and a half they were off the dock for three hours of trials. One of the other concerns was how the boat was going to handle because it had never been over 15 or 16 knots before and she had a steering system and rudders. We had better results than we could ever hope for. The second day the owner got some time on the helm and was very, very pleased. I asked the owner, ‘What did you cruise out before?’ ‘About 12’ and I had the captain show him 12. Then I said ‘What do you want to get to?’ and he said ‘17 would be nice,’ so we showed him 17. I said ‘All right, now show him the new cruise speed and he took her up to 21-22 knots and turned the helm over to him. He was all grins. Then we really put her to the pins and showed her what she could do. We turned the steering damping up and down so he could feel the new helm, all really top shelf technology.”

The best they saw was 25 knots, but that was at 80% capacity. They think by adding a little more pitch she will do three or four knots more.

The interior was not reinstalled before the sea trials just in case they needed to make changes. Now, the interior is going back in. The owner and Richard discussed adding more depth to the keel and two feet will be added to the back end of the keel. This will give her better tracking and protect the running gear in case of a grounding. Also, they will put back the spray rails.

What is next for Richard, well there is a 42-foot John Alden designed centerboard schooner that needs about five-month’s worth of work before she is ready for the water.