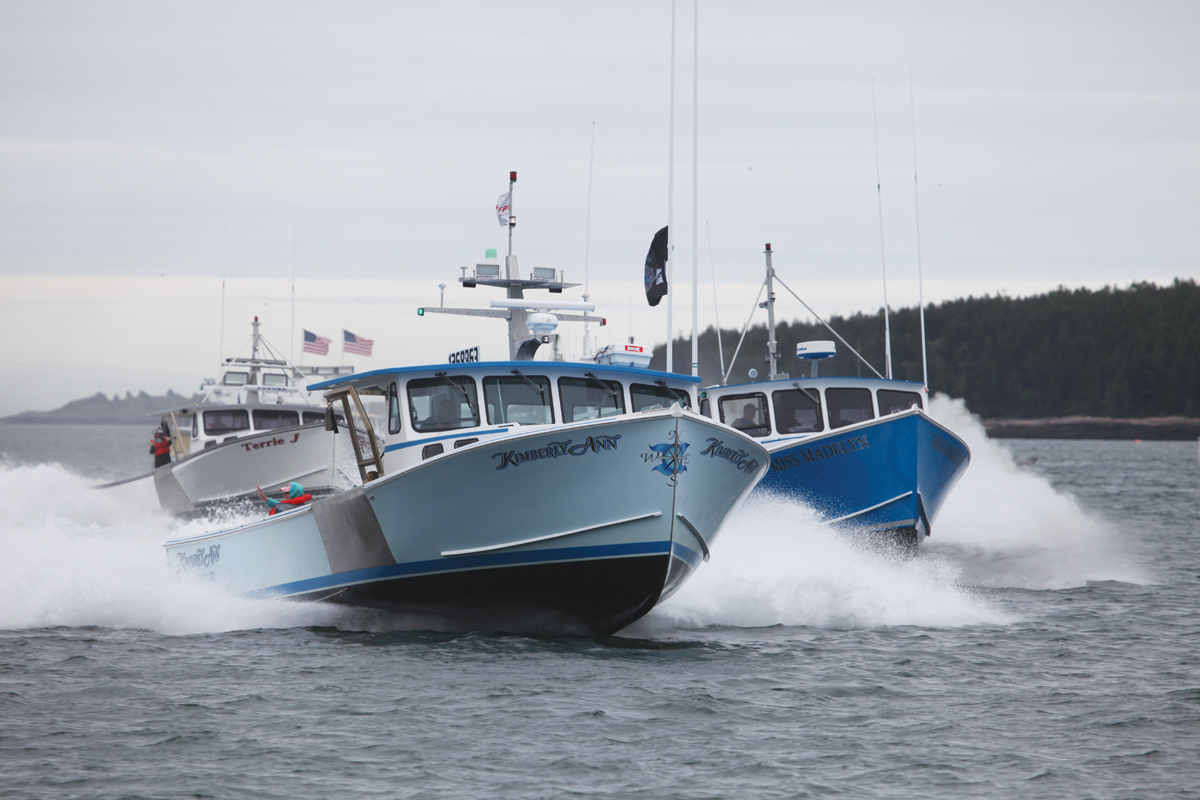 TERRIE J, KIMBERLY ANN and MISS MADELYN battling it out in the final heat of Diesel Class M(B) at the Moosabec Reach races last year.

The days are finally getting longer and the temperatures are slowly rising. With spring comes the anticipation of summer and for many on the coast of Maine that means getting their boats ready for the up-coming season. Then there are those boat owners, lobster boat owners, who go beyond this and make sure they are ready for something way more important, lobster boat racing. Any boat racer knows that there are small changes you can do that can make the difference between winning and losing, like a nice smooth bottom and a lobster boat engine putting out all it can. Rumours have been circulating around the coast all winter and the 2022 season looks like it could be another great one with several new boats and several others with new engines. This means the status quo could be shaken up.

At the annual meeting and banquet held at Robinson’s Wharf on Southport Island last October there were no changes made to either the classes or rules for this season. Unfortunately, the Maine Fisherman’s Forum, which normally takes place in early March, was cancelled late fall when the pandemic numbers were rising. Traditionally, we hold a meeting at the Forum where we go over any changes and usually find out a little more about what has been transpiring over the winter.

All 11 venues (Boothbay, Rockland, Bass Harbor, Moosabec, Stonington, Friendship, Harpswell, Winter Harbor, Pemaquid, Long Island and Portland) are on the schedule and that should not change. The only issue we could have is when Mother Nature decides to send us some serious inclement weather, such as high winds and or fog and then the races will be postponed and given a rain date. The only rumbling regarding changes that I have heard was from Harpswell, who will be moving the race course from Pott’s Harbor to Mitchell Field, the old U. S. Navy tank farm. We raced there several years ago, but when the races were taken over by a new committee headed by Larry Ward in 2018, he decided to bring them back to Pott’s Harbor.

So how can the status quo be changed this year? Numerous texts were going back and forth between two racers in the Gasoline Classes as to who would be the top boat in the Gasoline Classes. The Engerts of Boothbay Harbor say they will have THUNDERBOLT [South Shore 30; 621 Chevrolet] ready, which has not raced since Portland in 2018. They explained they have all the parts and pieces for their engine and will be ready. Shawn Alley and LITTLE GIRL [28’ Calvin Beal Jr.; 466 Ford, Blower] has been the dominate boat for several years and he has opted for a new engine with a lot more power hoping to ensure that he stays the top boat. One problem he may not be able to overcome will be obtaining all the parts he needs to finish this engine. One can bet they both could be well over 50 mph, but can they get over 60 and challenge Cameron Crawford’s WILD WILD WEST [West 28; 1,050-hp Isotta], the top diesel boat, that will be a big question and one that would be fun to watch.

Three other gas boats could be a threat if they repower and find a lot more power than they had last year. Mark Davis with DOWNEAST NIGHTMARE [Mussel Ridge 28; 1,000-hp Chevrolet] did well last year and won Gasoline Class E, just beating out LITTLE GIRL in the points total by going to more races. However, when they faced off against each other LITTLE GIRL had the edge in speed. Mark Freeman with FOOLISH PLEASURE [30’ Custom Riley Beal; 650-hp 455 Stroker] did well last year too, getting close to 50 mph. FOOLISH PLEASURE, when owned by Galen Alley of Beals Island, set the speed record at 72 mph so we know if you put the power to her, she can go. Jeremy Saxton of Harpswell in VOOP [Duffy 30; 502 Chevrolet] is also capable of easily going over 60 mph when her original owner raced her in the late 1980s. The rumour is that she has been repowered and all this could make for some interesting racing for the top spot in the gasoline classes.

Colyn Rich’s WIDE OPEN [26’ Robert Rich; 350 Chevrolet], who competed in Class B, suffered a major engine issue two years ago and has not been out since. Last fall his main lobster boat developed an issue, which meant several weeks in Rich’s Boat Yard at West Tremont having repairs made, so WIDE OPEN may be sitting out another year, but hopefully not. Doug Dodge had his new boat, a wooden 28-footer with hard chines, close to being ready last year, but issues kept her in the shop. He said a month ago that she needs just her final coat of paint and she will be ready.

Lindsay Durkee’s BLACK DIAMOND [Holland 32, 454 Chevrolet] has been the dominated boat in Gasoline Class C for several years and one can bet she will be back this year to defend that title.

So, who is going to best Cameron Crawford’s WILD WILD WEST? That has been the question for several years, but this year someone may have enough to be very competitive with her. Jeremy Beal’s MARIA’S NIGHTMARE II [Wayne Beal 32; 800-hp Nanni] will be repowered with a 1,300-hp Isotta. The engine is in and they will be sea trialing her to see what changes need to be made to get all they can out of her. Glenn Crawford bought ten 1,300-hp Isottas and sold them all, hoping that someone would be able to be competitive with his WILD WILD WEST and give them and the spectators a close race.

There is another couple of boats coming that could get over the 60-mph mark. Alfred Osgood of Vinalhaven is getting a new Wayne Beal 36 with chines and over 1,200-hp engine. He could certainly be a threat to challenge for the top spot. The hope is that she will be ready for Boothbay. Another boat is a Libby 34, which is getting one of the 1,300-hp Isottas put in and she should also be ready for Boothbay.

AUDREY MAY [Holland 32; 425-hp Cummins], owned by Randy Durkee, went to every race last year and won Class E. He will probably be challenged by Dan Sawyer’s HIGH VOLTAGE [AJ-28; 400-hp Yanmar], which won the class the previous year, but was only able to race a couple of times last year.

We know that there will be a couple of new boats out this year in two other diesel classes. Winfred Alley, who has dominated Diesel Class F for several years with AIDEN MARINER [Calvin Beal 34; 425-hp Cummins], and Dana Beal (the dominating boat in Class G), RIGHT STUFF [Libby 34; 500 hp Cummins], have both built new boats this winter. Winfred’s is getting a Libby 34, FAITH MELANIE, with the same engine he had in his old boat. Dana is getting a Libby 41 with a 1,000-hp FTP. Both are hoping to be at Boothbay. The former AIDEN MARINER is now owned by Mitch White and she is getting MISS NORMA’s [Wayne Beal 36; 480-hp Cummins], owned by Dean Beal, engine. Dean is repowering with a 500-hp Cummins and will remain in Class H and a top contender for the title.

One of the fan favourites is Heather Thompson’s GOLD DIGGER [Wayne Beal 36; 675-hp Scania] of Harrington, which has been the top boat in Class J. However, the rumour is that someone is coming out to challenge her for the Class title.

Another very competitive class has been M(B) between Matt Shepard’s ALEXSA ROSE [Morgan Bay 43; 750-hp John Deere]; Eric Beal’s KIMBERLY ANN [Calvin Beal 42; 750-hp FPT]; and Jason Chipman’s MISS MADELYN [Osmond 42; 700-hp Scania]. These three boats are all about the same speed and it is anyone’s guess who will be the winner this year.

Last year we had 645 entrants for the year, which was up from the 379 the previous year when we only held six races due to the pandemic. In 2019, our best year, we had 823 entrants for the races. Last year we had rain and wind at several races and that easily accounted for the difference. So, if the weather is good the turn out will be too. However, the real issue this year may all come down to economics. With the price of everything steadily climbing, the unknown price for lobsters, racers may be more cautious about how many events they may attend. Despite all these factors, the unknown competition will certainly draw a huge crowd and most of the answers will come with the first two races of the year, Boothbay, and Rockland, so do not miss them!