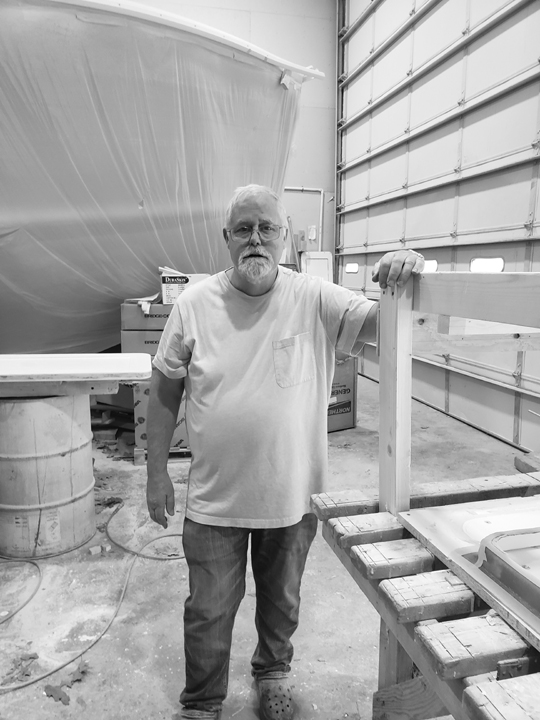 WALPOLE – One of the notable boatbuilders on the coast of Maine is Ken Flower of Flower’s Boat Shop in Walpole, which is now run by his son David. What is interesting is the family history in boatbuilding, which dates back several generations.

Just outside the shop they have a 46-foot cruiser about 98 percent complete. They were putting stainless steel half round on her guards and rails, but the problem was getting some of the other items to complete her. Besides the items they are waiting on they have some hydraulics and plumbing to do. David took their 43, made some significant modifications to her and made a one-off hull. Ken added, “It is a nice job. I think he did a better job on that then I did the 43. It is a nice boat, but hopefully we never have to build another one. There is so much time in it and too much room for people to put stuff in.”

Inside they have a 38, which will be the next one to go out. She needs to be wired, but that will be a little harder since they could not wait and continued the build. Next her is a 43 they are progressing on.

The 38 outside is covered, but it is about half done. The engine is in as is the shaft, bulkheads and the forecastle with bunk unit. The top is on it, but not attached.

David is the fifth generation. Ken said, “My father, my grandfather, and his father who lived on Long Island. I don’t remember his name, but he went out to California to find gold. He found it, put it in two caskets and brought it back to New York and bought half of Long Island, Oyster Bay. I didn’t know my grandfather very well. He did the little cruisers. My father went down, my grandfather was in Florida and somebody came in with a new product to build his hydroplanes. He mixed it up, let it harden and says, here is your new boat. My grandfather scoffed he said oh no, no, no you can’t build a boat with that stuff. It was fiberglass obviously. He never went along with it so eventually he got out of the hydroplane business and then he got into the business of building small cruisers. My grandfather was a smart guy. He went over to the next couple of counties in Florida and bought a great big piece of land that he knew was for sale right in the middle of a swamp. A few years later, he didn’t have to work anymore, it was the middle of Disney World. He did wind up in Europe for a while and helped somebody start up some sort of a line of boats.”

Ken’s grandfather was very well known for his hydroplanes, which raced all over the country. They were his designs. Ken added, “My knowledge is that the original hydroplane was a high-sided style boat and my grandfather was the one that took and squatted them down and made them into the style hydroplane you see now. At least he takes credit for doing it. I don’t know. My father raced them. He was sick one time and somebody else did and went 48.257 mph with a 9.9 hp Mercury. That was the world record at that time. He was pissed because somebody else got it with his boat.

“My father had a spat down there in Florida with his father,” said Ken, “and he came up here and moved in with my Grandma Carver, his mother. I think I was 4, probably about ’59. We lived in Rockport that was when he was working for Bob Lane at Penobscot Boat Works. I started going to kindergarten and none of the other kids could go down to the boat shop. I could go down and the other kids followed me. They would be sneaking down I remember one day a guy working there, Deadeye Eaton, was talking to me and pulled his pant leg up and pulled his stocking up and took a tack out of his mouth and he nailed his stocking to his leg. He had a wooden leg. They didn’t know that and they ran back up over the hill.”

The first boat Ken helped build was with his father when he was about 8 years old. She was a 16 or 18-footer and was built for the owner of the Ingraham Store who had helped the family out when his father was in the hospital by providing food for them.

Penobscot Boat Works built a lot of these runabouts, in fact they were done on a production line. When Ken’s father was working there Bob was running the shop.

When asked who taught him the most about boatbuilding Ken quickly said, “Roger Morse. Well, I got hurt, a couple of discs blew out of my back. I had an operation and then nobody wanted to hire me. So, I just kept my mouth shut and I went to work for Roger and Cabot (Lyman) came along and bought the place. I think Roger was there for a little less than a year before he left. I stayed with Cabot, as did Dick Benner and a couple others. Dick Benner also worked at Penobscot Boat Works, with my father. As for Roger, I hated him when I was a kid. I was 18 years old when I went to work there and he used to make fun of me. He’d pick my work apart, but I remember it like it was yesterday. I have never forgotten a thing he taught me. It was a while long ago; Roger and his wife were in the grocery store and I said, “Roger how are you doing?” He says, “I am doing good,” and he said, “I hear you are doing pretty good” and he came up and shook my hand. The last thing I remember him saying to me, he said, “Your old man would be some proud of you” and that meant a lot to me.”

When Ken was working for Lyman-Morse Boatbuilding they built the moulds for the Seguin 43. He said, “I learned a lot there, mostly from trial and error. We built several of those. I was doing joiner work and he put me into fabrication. I miss Cabot. I got a lot of ideas from him, especially watching him build that business up taught me a lot about staying in business.”

Then a guy called Ken and offered him a job in Massachusetts, at Grave’s Yacht Yard in Marblehead. Ken said, “I went down there and managed the production line on two sailboats. That started out great and then they got in a mess financially and that all fell apart. I came back and went to work at Maine Marine. I wasn’t going to be there long; I just needed a job to get by that winter then I started doing my own thing.”

When Ken was 24, he started a boatbuilding shop in the Newbert & Wallace yard in Thomaston. He rented building and finished off a couple of Young Brothers boats. Ken added, “I worked for Eric Lee Neilson, that was the old man’s son, and we were doing a 57-foot cold moulded Herreshoff. We did that in the old Newbert & Wallace building, but on the ways in the far part of the building. That boat project never got finished. He had some issues and he and his wife wanted to go south so they just packed it up and left. Left everything. I took over some of his work, but I kept my name. I had the old work and I picked up some new work and then my father passed away and when he passed away I kind of lost interest in building boats. I kind of pulled my horns in and I worked for Bruce (Farrin) down here for a few years. I decided I wanted to move on so I changed jobs. I was working for Gamage Shipyard, for Linwood. I am working like a dog, carrying boat stands and I didn’t have any interest in doing that. Anyway, I gave him my notice and I came home and I started building boats. I put up a little shed and just started doing a little 22-footer and I did jobs on the outside. I did that, probably a couple years. Then I put up a building over there. David was 8 years old and he was helping me build it. Got the building up and the work just kept coming and coming. Did very well those years. I was doing 3 or 4 boats a year depending on the style by myself. David was lobstering and diving and he came to me and says I want to come in and help you build boats. He came in and worked for about a year and then we put this place up.

At the time Ken did not have his own moulds, he was depending on other builders. He added, “So, I built my own. I took a 30-foot South Shore and cut it all apart, put it all back together and I built it down. Kind of like the Northern Bay and that boat went nice that is the 33. We did very well with it. Then we went into the 36 and 38, same idea. We built a few of them, but it seemed people never wanted the same thing. They always want something you don’t have. Then we built the 43. That has been okay, I will never get my money back out of the mold.

Well, there was an issue with the ownership of the moulds and Ken called Jim Beal, who he knew was interested in them. He came down and picked them right up. Ken added, “That was when I decided to do my own moulds.”

Presently, Flower’s Boat offers a 33, 36, 38 and the 43. They think they may want to go to a more of a production boat, and then if the customer wants an option, they can have that done at another yard. In today’s world it is all about surviving the economic downturn and to do this you make decisions that are financial responsible.