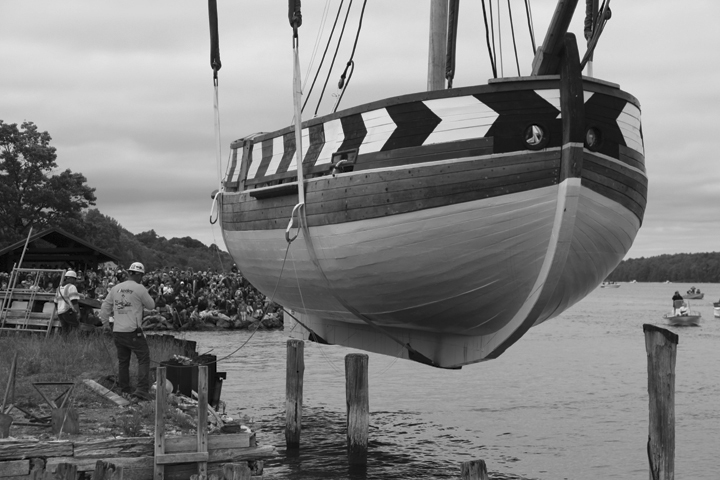 BATH – On 4 June over 3,000 people gathered in the late afternoon on Bath’s waterfront to watch the launching of the replica vessel VIRGINIA. This was the first vessel built in North America at the Popham Colony in 1607. The hope was to build this vessel and launch her for the 400th anniversary, but financial issues delayed the building. Determined to accomplish the goal another group picked up the challenge and completed the mission when just after 1630 VIRGINIA was lifted off the hard by two huge cranes and placed into the Kennebec River.

James Nelson, a noted historian, writer, now head rigger on VIRGINIA, has been involved with this project for the last six years. He said, “I came down and saw the progress they were making, very impressed, and told them that I am not a shipwright but I am a traditional rigger and would like to volunteer. They said, great, we don’t have anybody that knows any rigging, you’re in charge.”

James was working at the Maine Maritime Museum, which is where the Virginia Project first started. He added, “I always kept tabs on what was going on. I was working at the Maine Maritime Museum for a while as the education coordinator there and back then Maine’s First Ship had their office in one of the buildings so I was talking to the executive director quite often. The first Board decided to throw in the towel because they couldn’t raise the money. Rob Stevens and some others decided to go ahead and try to revitalize the program and did. Originally, they wanted to build it at the Maritime Museum and the Maritime Museum for understandable reasons said we don’t want you to start unless you have the money to finish it because they didn’t want a half-built ship languishing on their grounds. That was fair, but that is a lot of money to raise in one chunk and they were never able to do it. I always felt that they should just start building it and raise the money as they go. Ultimately that is what they did and it was very successful. They started building it right here at the Bath Freight Shed. They laid the keel in 2011 but had been doing educational programming before that. They have been able to keep ahead financially all along raising money as they needed it. Construction never had to stop for want of funds. I will be perfectly honest I have seen a lot of these projects come and go, most of them fail and I was a little cynical about the chances of this one at first. It wasn’t until I came down and saw the progress that was being made and realize, wow.”

Rob Stevens slated to be the shipwright right from the beginning. James added, “I was working at the Maritime Museum and I was building a replica of the houses they had built at the Popham Colony and Rob was there making spars for VIRGINIA. There wasn’t any VIRGINIA at the time, he was just shaping spars as sort of a hands-on demonstration. The economy was not great, they had a hard time raising money and ultimately weren’t able to do it, even though they did raise a considerable amount of money. They figured they’d just fold so they closed up the organization and donated the money. Then some of the other folks that were involved, including Rob and Orman Heinze and a fellow named Fred Hill and others, said ‘Now wait a minute, this is a worthy project. This is something we should keep going.’ So, they formed a new Board of Directors and began this new thrust with the idea of not building at the Maritime Museum just building it as they could. I think the originally idea was to not go for a Coast Guard license but that has since changed.”

There have been major donors, but the majority has been small donors. They have also benefited from grants from a number of different organizations. James added, “Some folks gave us a $250,000 donation for our endowment, so we have a very nice endowment that we don’t touch. That is such a blessing because a project like this needs an endowment. That is really the only way they can be viable.”

In 2009 they built the shallop, kicked off educational programming and started doing the lofting of the ship. In 2011 they laid the keel, followed by the frames. Then they built the boat house. James said, “When I came by the project in 2016, I believe all the frames were in, the planking was mostly done and again that really impressed me. I hadn’t realized how far along they were on the construction. The hull looked like it was almost done. So, the planking was finished last year.”

As soon as James joined the project he has been working on the rigging. He said, “We spent the past six years building the rigging here inside the freight shed. Fred Gospee made most of the spars, the yards, and the masts. Since then, we have been making all of the components to go on them, what you call dressing the yards.

“It is a big job,” continued James. “Ideally things are really ready to go. A lot of these yards they already have the sails on them, a matter of just putting them on the ship.”

James was working in television industry, which he was not thrilled with, and living in Los Angeles when he was 26. He explained, “I was living on a sailboat and really more and more I just wanted to sail. About this time, I was thinking what I was going to do when I grew up. This replica sailing ship came into the port, a replica of Sir Francis Drake’s ship GOLDEN HINDE 1577. They were looking for crew and I thought geez, this is what I have always wanted to do. The idea was I would leave my job, sail for six months, get that out of my system, come back to LA and continue my career in the television business. I was gone for a year, left the HINDE came back to LA sold everything and moved on to the next ship, LADY WASHINGNTON in Aberdeen, Washington. That was real fortunate because they were just rigging the ship from scratch so I really learned a lot about rigging. That was really sort of the basis of my education as a rigger. Did work for them for a couple years, got involved in the Tall Ship’s Project that went nowhere, then I went and worked on the sailing ship ROSE out of Bridgeport, Connecticut. She was the ship that played SURPRISE in the movie “Master and Commander.” I was with ROSE for a couple years and then I decided that writing about sailing would be a lot easier than doing it so I gave up sailing and became a writer. I have tried to keep my hand in it and have been involved in a number of sailing ship projects since. VIRGINIA was just a great opportunity to keep the old skills alive.”

How close to sailing are they? James said, “I am hoping that we will be able to go sailing in the beginning of September. The first step is putting up the rigging which is what holds the masts up. I am doing that right now. I am putting in the dead eyes that we use to tension the rigging. Then we will start putting on the ratlines and then we will start taking some of these yards and getting those in place and running the rigging. Then making sure everything works right. It’s a little tricky to judge how long it is going to take but my goal is beginning of September we will start sea trials.

They think the sea trials will take place off Fort Popham where they have a little sea room. James concluded by saying, “Her primary mission is always going to be education and we are looking now at exactly how that will work. We are working with summer camps to bring kids onboard, take them out sailing ideally. During the school year hopefully school programs will be going out. Hopefully, we will be visiting maritime festivals, maybe Portland up to Rockland.”