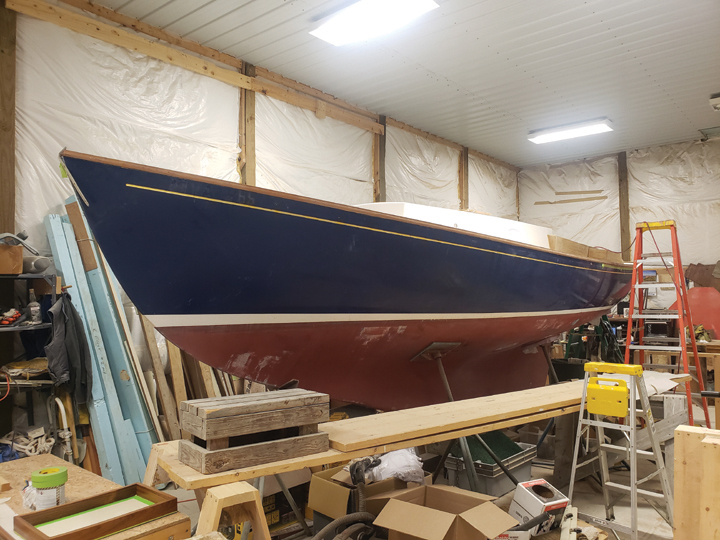 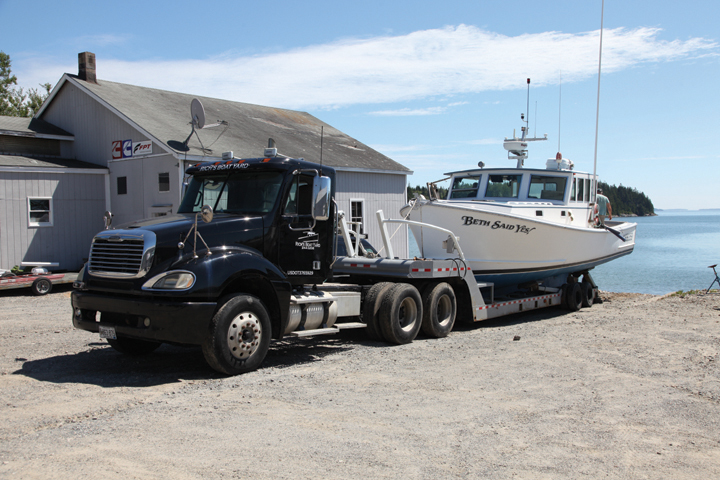 The lobster boat BETH SAID YES hauled up at Rich’s Boat Yard in West Tremont. She is a Young Brothers 40 powered with a 700 hp Cummins and hails from Bar Harbor.

One of the prettiest designed sailboats is the Bridge’s Point 24. Bill Wright currently is the builder of the Bridge’s Point 24 and on the shop, floor is hull #36. She was laid up by Bridge’s Point Boat Yard in Brooklin and then was finished out by Pert Lowell Co. in Newbury. Somehow, she went to the bottom, was salvaged and the restoration was started by someone else. This person realized that this was more than what he bargained for and offered the boat to Bill. Everything was stripped off the deck and since the deck was stripped built, that was removed and the interior was sandblasted by the other person. So, when she arrived at the shop, she was a stripped-out hull. Bill has built the forecastle and cockpit. She originally had a Westerbeke, but that has been changed to a 12-hp Nanni. Bill added, “It is the same footprint. I usually use the smaller one, which is the 10 because you don’t need 14 hp, but the former restorer made that decision. However, what you get with a 14 is an oil change pump, an electric shut off and a much nicer display.”

The interior has been built and painted and just waiting to go in. The varnished items were to arrive shortly. The curved seats have been fitted and presently, Bill was working on fitting the coamings.

Bill went through the Apprentice program at the Maine Maritime Museum in Bath. He was there when Arno Day was one of the teachers, he added that one of his classmates was Jesse Lowell. Bill grew up on Cape Cod as his father worked at Wood’s Hole Oceanographic Institute in Wood’s Hole. His introduction to sailing was in a 31-foot Tancock Whaler, built by Ralph Wiley in Oxford, Maryland in the 1930s. She had unfortunate end, when she grounded in the Chesapeake under her new owner and was broken up. Bill worked at Strawbery Banke in Portsmouth, New Hampshire and while there he bought a 26-foot gaff-rigged Crocker, built by Myron Cowden of Amesbury, Massachusetts. Bill said, “He built the boat so it would fit under the old chain bridge so it had to be x tall. It was kind of a funny boat. It looked really short rigged, kind of clumsy, but it sailed great. When we moved up here, I sailed it up from Rye, New Hampshire. We had that here for a number of years and once we had our daughter it wasn’t big enough to cruise in with three people. Then I went to the dark side and I got a fiberglass Able Marine 32, and that is what I have now but it never sees the water.”

Bill was introduced to the Bridge’s Point 24s when his father purchased Hull #23 from its original owner from East Blue Hill and he took her to Cape Cod. He sailed her for about 15 years and gave up sailing when he was 89 years old. She is now out in the storage building but needs some TLC. Bill is planning to restore her, sell the Able 32 and sail his father’s Bridge’s Point 24.

Bill likes that she is a very traditional, classic looking boat. He said, “It looks like a wooden boat. Full keel, stable, nice big cockpit, comfortable to go overnighting in if you want and if you are crazy you can cruise in it. She sails great. It is quick. It doesn’t turn as fast as like a J-24 would, but it has a full keel. It doesn’t take much wind to get her moving. She is a 6-6½ knot boat. I sail it with just a 100% jib and full main and in most breezes that is all you need.”

What comes after this rebuild? Bill has had several calls for new construction, but no one has committed as yet. Usually, people do not order until late summer or early spring for a next year delivery. He said he is not committing to anything until the one on the floor is done and out the door.

The new boat, a 26-foot wooden boat with hard chines, UNCLE HAROLD, went over a couple of days before the Moosabec Lobster Boat Races. When asked how she went, Doug said, “Well, the first day we blew the water pump, so we really didn’t get a good chance to try it. Got up to 43 on GPS. I thought I fixed the water pump. I took it out and had it pinned, but she still wouldn’t cool so I switched over to my other system and she cooled but I forgot to retard the spark so I blew two pistons. When she was doing 43, she was turning 5600 and before she blew, she was turning 6000, so I gained 300 so we estimated we were probably doing around 45.”

Doug was really pleased with how the boat came out and how she performed. He said, “She is smooth as silk. I was surprised how steady she is for her width. That chine…the water pressure is bearing right on them corners. She just kind of jumps totally up and she is out as far back as where I am standing, about the last 3 feet of the chine. She is throwing spray down, nothing up by, so we’re good. I am already thinking of the next one.”

He was hoping for more speed than BRENDA and he got five more mph. When she was launched, she was powered with a 350 ci Chevrolet. He explained, “A 350 bored 60 over. She had already been bored 30 because it was a Mercruiser rebuilt that I got from John Church. John put it in his Chris Craft well, they put the engine in the boat somewhere up towards New Hampshire. I went with him to get it and they had put the hatch over it, but they didn’t cover it and rain got in it. They went to start her and she was stuck on number 2 cylinder, which is the right bank front cylinder. They had to take her out and take her apart, but when they did, they damaged the cylinder, big gouges in it. Anyway, John wanted the diesel I had in the BRENDA and he said, I don’t need this engine, you can have it so that is how I ended up with it. The first year I used her in the BRENDA for lobster fishing, she turned 3,900 was doing about 24-25 and in 2017 she was turning 5,700 and we were doing just about 40. At that time the top end was aluminum heads and air gap intake went from a 600 to 700 cfm carburetor and a different cam. It is a Vortex engine, so they have got the rear main seal on the outside which is a good feature. I am swinging a 19-inch diameter and a 23-inch pitch propeller with quite a rugged cup in it. Everything that I had in the BRENDA, everything is the same so I could compare the two hulls. This boat is longer but it is not quite as wide. The BRENDA is 8-foot 4-inches, this one is 8-foot but she is only 7-feet on the waterline at the transom. BRENDA was 8-feet on the transom. I am happy with it.”

The 350 is out and apart on the shop floor. Doug is now getting ready to repower, saying, “I am putting this Olds 455 in her. The only modifications are the air gap intake, roller rockers, but everything else is stock. I am looking at the future and I bet another Chevy, a bigger engine, around 800 hp, that would be enough. 800 hp would push this thing close to 70. The VOOP had 840 hp and she did over 70 and I think this will sail better than the VOOP.”

He said that he would like to build another one, but lighter, out of fiberglass. He said he would take the building moulds, strip plank and then glass inside and out and only have a spray hood.

Doug says he will be ready for next season and will run her on her own bottom to all the races, starting with Boothbay.

On 30 July the Boat School celebrated their 50th anniversary at WoodenBoat in Brooklin with a cookout organized by Al Strout, one of the first-year students. Doug was the teacher there for the first two years and went to the re-union. He said, “We went out for a ride on what we called the School Boat. I didn’t realize she was that big. She was way ahead of her time, 31 x 11. I made the half model. We did all the lofting and that was at Calais. Then they moved to Lubec. It was going to be a 30-footer, but the oak was good so I made it 31. Penio sawed the lumber at his cost, all the oak and cedar, and when my uncle’s shop burned, I saved a 455 Buick and we used that engine. I taught the engine course at the school and we rebuilt that 455 Buick. Went all through it and Rier Buick donated all the parts and a transmission with a water-cooled manifold. When we got done, we launched her into the St. Croix River and headed for Eastport. Whoever has taken care of this boat, it is beautiful. I mean it is better than when we built it at school. They put a different pilothouse on it because that one of course got rot. That was built with marine plywood and plywood back then was good…you could keep paint on it. The roof, sides was cedar, and instead of putting a V-windshield they just put one straight across. It looked good. The hull looked good. I checked out the ribs that I could see, the sheer clamp was nice and hard. They have got a Mercruiser small block 383 cu in for power and she kicks right along. It was a good time. Good to see some of the students.”

On the shop floor they have a Calvin Beal 42, which they are finishing out for rod and reel and lobster fishing for a customer from Rhode Island. She has a split wheelhouse, V-berth and a couple of cabinets down below, a 400-gallon fuel tank, two lobster tanks, wet exhaust and is powered with a 675 hp Scania diesel. She should be finished the end of summer or early fall depending on the availability of items. The engine is not arriving until September as they are waiting on the gear.

Back a couple of months they finished off a Calvin Beal 36, also powered with a 675 hp Scania. She was finished out as a split wheelhouse lobster boat for a fisherman from Martha’s Vineyard. They also removed the transom as he has been forced to fish 10 trap trawls.

Presently on the floor Shawn Snow is laying up a 23-footer for Joe Sargent of Milbridge. He still had flanges and keel to do, another double, stringers and then what he wants for a core in the transom. When this one is done, they have one more on order and just shipped him a 33. They may also have a 38 South Shore hull to do for Joe.

They are also laying up hulls for John’s Marine Care of New Harbor, which own the old Webber’s Cove 22, 26 and 29 moulds.

Shawn also has had calls on the Northern Bay 38 mould he owns, but at present no one has put a down payment down.

Shawn shares the shop with a finisher, adding that all he wants to do is lay up hulls. Working with a finisher allows him to do just that. He added, “Not many people want to do this part of it. I don’t mind…the day goes by fast.”