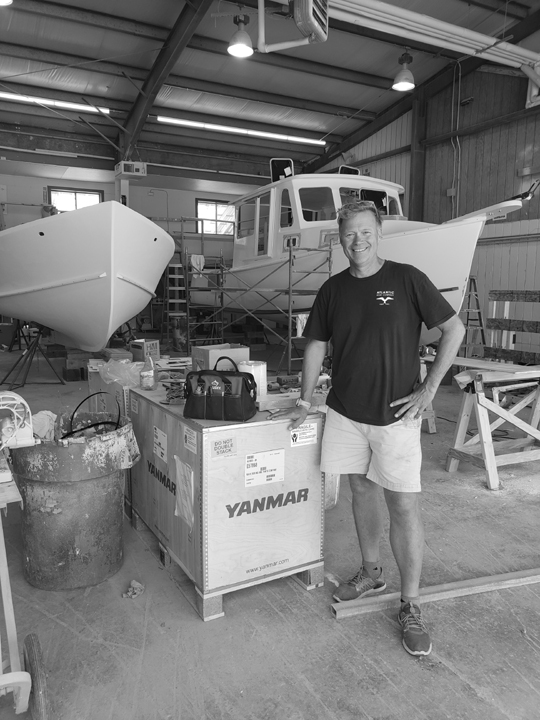 BROOKLIN – One of the most noted boatbuilders on the coast of Maine has to be Atlantic Boat in Brooklin. This is a combination of Duffy & Duffy and Flye Point Marine, which gives them a variety of proven models. Since they were combined the ownership has changed a couple of times and is now owned by Cy Hannon. Cy has now brought on Alex Loer on as the president and chief operations officer.

Alex grew up in Medfield, which is just outside of Boston to the west and not near water. His introduction to boating came sailing at a summer camp at Buck’s Harbor here in Maine in his early teens. He added that he had a mentor that taught him a lot about boating. Alex went to college, but he did not sail there. However, during the summers he sailed, including racing, every chance he could around Cape Cod. He sailed on J-boats and even the Wianno Sr. That evolved into doing offshore deliveries on larger sailboats to Florida and the Caribbean in the late 1980s and early 1990s. One of his mentors in racing was Wiley Wakeman, who is presently at Tabor Academy in Marion, Massachusetts. Another great mentor was John Dody, who was captain of a number of Little Harbor yachts.

He took advantage of learning all aspects of boating from numerous other people and that paved the way for him to start a launch and mooring service on the west shore of Marblehead in the early 1990s. Alex said, “We started trying to do the whole harbor, but really focused on the Marblehead west shore in Salem harbor but on the Marblehead side. We started with moorings and realized we had to offer a launch service. When we started the launch service, that prompted me to design the interior for a new launch which is what I brought to Atlantic Boat in 2005. I roughed out the design and had someone with a finer skill set than myself do all the finishing work. Atlantic Boat did the moulding. We sold the first six relatively quickly and then it had its ups and downs. In the last five or six years it has really taken off building multiple boats every year and we found new markets for them too. The Yacht Club Launch is great and there is plenty of yacht clubs that use them, but another market is water taxis or small boat tours. We filled that gap pretty well, so that is taking off. When I sold the launch and mooring business in Salem around 2010, I kept the launch building part of it for myself.”

Even while he was running the launch and mooring business, he still did a few deliveries. After selling the launch and mooring business Alex purchased a 70-foot steel hull vessel and used it for oceanographic research. Alex added, “We did a lot of work for the State of Maine, Woods Hole (Oceanographic Institute), Duke University, and the Navy. I’d say the longest stint we had was down in Fernandina Beach for the Navy, who was putting in a whole new offshore testing range. We also had a Duffy 38 that we used for marine mammal surveys when they were putting in the range. Eighteen years of doing that type of work, mostly a lot of autonomous underwater vehicle work. We did a lot of unique projects and we stayed busy. There were a few years that were kind of lean, but I ended up selling both boats around 2015-2016. I am glad we sold that before Covid came because we never would have survived.

“At this point, things here were busy with Atlantic Boat doing launches,” said Alex, “and I liked what Cy was doing with the boatyard. We had the same vision of what we saw the yard doing and he kept hinting it would be nice if maybe I came up and worked here. I needed to check a few things off the list personally before I could commit to coming up here full-time though. That all kind of fell into place last fall and I talked to him and I said, ‘Here’s the opportunity for me to do this if you are still interested,’ and he’s like, ‘absolutely.’ We hashed out the details and I closed up a few things down in Massachusetts and started March 1.

“My mission is to increase our visibility and our sales and the Duffy line,” said Alex. “The Atlantic Boat brand name as well known, but the Duffy one still has the cache that everyone knows. My goal is to bring that back, to increase our top line in new boat construction, service, and storage. All three elements are very important to keep it balanced but also to tighten up the bottom line. When we do a project that it goes out and it is profitable because if you build a boat and you are losing money on it…eventually that end of the road is not a happy one.”

Alex is a big believer that the customer experience is really important. “If we tell you what our expectations are and you know what yours are and everything works together, your customer experience should be good. You should be able to watch your boat being built, come up and visit and if we keep it on schedule you are going to be happy.”

The issue today staying on schedule is a challenge with the supply chain problems. Alex said that they order all the big-ticket items as soon as the boat is ordered and hopefully that solves the problem.

So what models are currently being offered by Atlantic Boat? Alex said, “We technically offer boats from 26 to 54 feet. The popular one is the 26 because of its versatile nature. We can build a standard 26 boat, the launches and the 29 outboard version just from that one mould. The 29 outboard version I am very bullish on that. I think that is going to be a really good boat. It has good sea-handling capabilities, you have a cuddy cabin, you have got a head, you have an open floor plan, you have no engine box, outboards are easy to maintain, you can store it anywhere because you are on a trailer. There are a lot of boxes that that outboard version checks. The Duffy 31 is popular as is the 35. We calculated the other day that between the original Duffy & Duffy and everything, over 1,000 35s have been built over the years. The 37 is popular we have got one in production right now and then some people stretch the 37 to 39. Then the 42 and 48. These are very custom, so you are looking at a decent timeframe to build them. On the BHM side, the 36 is the one that we go to, occasionally the 31, except we call it a 32 because there is a Duffy 31.”

Juggling storage-service and boatbuilding is a challenge, but in a changing financial climate it could mean whether you stay in business or not. Also, making sure the customer has a good experience is a must. This can be challenging since one cannot control everything. Alex has an exceptional understanding of the workings of the Atlantic Boat and how to make it all work. With the yard working the way they want it too they will now begin marketing their models and services more. This will certainly add to their continued success.