Maine Marine Salvage a Must Stop! 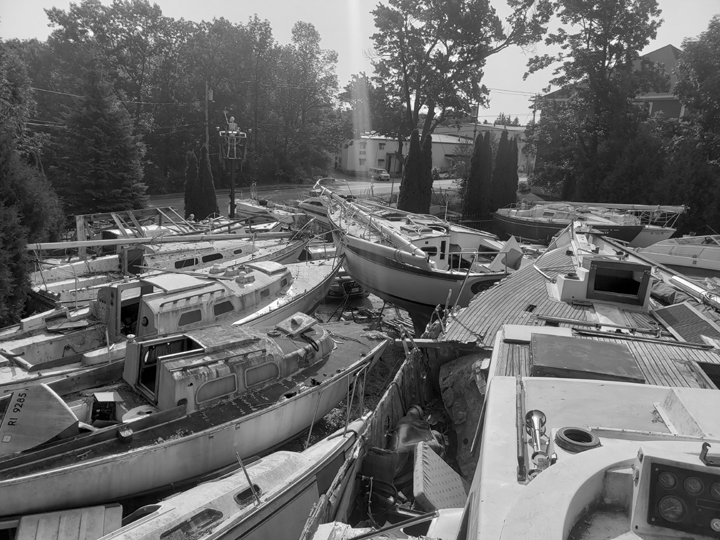 A view of a sea of boats waiting to be scrapped, but you can remove items as they are.

PORTLAND – One of the most popular shows on television is “American Pickers.” Many love just wandering through fields or buildings full stuff. They may not need it until they find it. It is the thrill of the hunt, finding that obscure item that you need for your house or boat. Well, there is such a place in Portland called Maine Marine Salvage at 326 Presumpscot Street that is an absolute heaven for those that own a vintage, or even a modern boat.

This used to be owned by Capt. Jim, but a couple of years ago he sold the property and all that was on it to Steve Goodrich. Steve was looking for a place to rebuild vintage automobiles and boats, however, there was a lot items that needed to be sold to make room. The lot had more than three dozen boats on it that needed to be stripped and cut up. Inside the building were items from floor to ceiling. This operation is headed by Linda Bridges, who works for Steve. She has been around the Casco Bay waterfront for a lot of years. She began at Handy Boat in Falmouth driving a launch for Jerry Dinsmore. She was also doing launch service for the Portland Yacht Club, which is right next to Handy Boat. She stayed there for over eight years and then decided that she needed a job with benefits so she went to work for Chase Leavitt at their Dana Street store and was there until they closed that aspect of the business. She then went to work for Vessel Services at their Commercial Street store. That closed and she went to work for the Gear Shop and then that closed. She worked for the Portland Fish Exchange for a time, but after a year and a half they had a major lay off and she was out of work again. This time she found something that had longevity, the drinking water business, where she was for more than 14 years. She added, “I missed the waterfront, but the waterfront in Portland is just not the same. The smaller jobs, the things that I did, those jobs are gone.”

She explained her being at Maine Marine Salvage, “Steve had other plans for this place, but so far we are still selling anything we can. We have all sorts of boat parts and lots of antiquities too. I just want to see this place continue.”

Walking up the driveway from Presumpscot Street it is obvious that what they have is overwhelming. Many of the boats on both sides of the driveway suffered a major grounding. There were several small sailboats up front that with a little love and some searching for parts and pieces could have a new life. Many of the bigger boats had been aground and suffered major hull damage. There was a C&C sailboat with the port aft quarter gone and a 47-foot ketch with a massive hole on the portside. Many of the damaged boats were too damaged to repair, but they still sported a lot of hardware that could be repurposed. Beyond the sailboats there were a number of powerboats intermingled around the yard. While I was there people were getting onboard several of the boats and finding items that they could use on their current boat. Others were looking for household decorations.

Apparently other boats had been stripped as there were lots of totes inside labeled with anything that you might find on or in a boat. Looking for a mast, booms, hatches, hardware, windlasses, horns, compasses, sails, bilge pumps, cabinetry and doors, you name it they probably have it. There are engines, but many of these were never flushed out or not winterized and are seized up. However, they still have good parts on them that are useful.

Capt. Jim had acquired a lot of antique items over his years in the business and these items have been a strong seller. Linda said, “There are some great things here. I have got some antique lamps, oil lamps, some have been electrified, some are still oil lamps, some are big, some are small, some are gimbaled, others hang. We had a Navy binnacle with compass from World War II. The guy offered me $1,000, I said $3,000 and after going back and forth we settled on $2,000. That was absolutely beautiful. Another guy came in and bought $3,800 worth of brass lamps for the house they were building. Nautical theme on everything. Another guy came here from, I think Oklahoma, and he bought lobster traps, an anchor and a port hole. He used to be in the Merchant Marine, but now he is in the heart of America and he wanted some nautical stuff.”

Some items are priced, but many are not. Linda, who knows the approximate prices of many items, will tell you what she is looking for and if you don’t agree she might haggle a bit.

Linda is worried that Steve might close the business. She was having everyone that came to the store last year call him and tell him to keep the place open. There is no question there is a major need for a boat salvage yard here in the State of Maine. Go through a boat yard or look out in the backyard of numerous homes in the summer and what do you see, a boat or boats that have been abandoned. Capt. Jim had an advantage, he owned a hydraulic trailer and was able to pick up boats that an owner wanted to get rid of. Businesses are businesses and that means they have to make a profit in order to stay in business. This one certainly could, but one needs to devise a plan that allows it to be profitable. Linda has a plan and that includes starting to strip the boats in the yard and then scrapping them, making sure that there are plenty of items for those coming to search for that obscure item.

Looking for an adventure, visit Maine Marine Salvage. They are open Wednesdays 11:00 to 4:00 and Saturdays 9:00 to 3:00 or by appointment. I was surprised at what they had and I am sure others will be too.