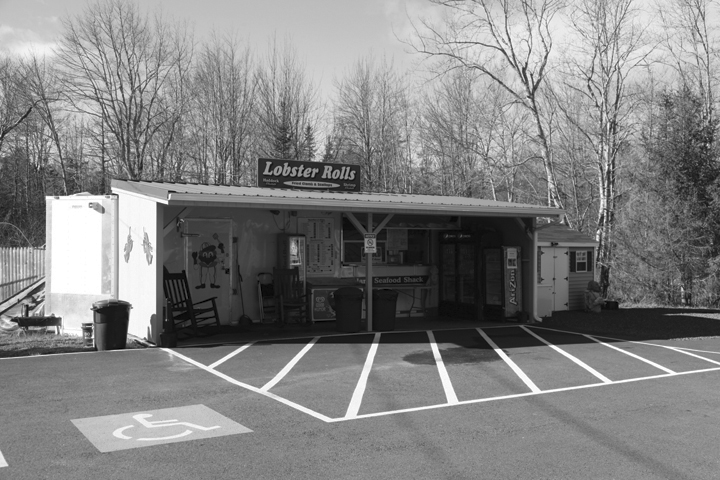 WALDOBORO – Those of us who live out on the road have our favorite places to grab a bite to eat. I am not one who will gravitate to fast food, I am looking for something a little better and one that supports the locals. Over the years I have located a number of great places to get good food, but unfortunately, many of these places are small take-outs that close in the off-season. However, a couple of them, in good locations, have discovered that they can remain open all year long and do so successfully. One such place is Delano Seafood in Waldoboro.

I always noted Delano Seafood sitting just east of Waldoboro proper on my way through. Then several years ago they added a take-out just to the left of their seafood store. One day I was running through and looking for a quick bite and stopped in and now I make sure to plan my day so I can have lunch there.

I knew Kendall Delano from the Friendship Lobster Boat Races when he was part of their race committee on the prize float and I knew he had some involvement with Delano Seafood. He explained, “Delano’s Seafood started 20 years ago in Waldoboro, technically my dad started buying clams in Friendship in 1984. That is where we lived, Friendship. He was always a clamdigger and he started buying clams and started the shop and probably 10 years after that he switched the name. It used to be Friendship Clam Company, so he changed the name to Delano Seafood. It was like the end of 2000, this land came up for sale…well, the year before that, I started Delano Seafood Market across from Irving’s.”

Kendall graduated from high school in 1991 the same year that he started lobstering. He started in a 20-foot Seaway and then moved up to a 24′ steel boat built by the Darling’s Center. This was followed three years later by a Five Islands 35 and then a Mitchell Cove 37, the last two named NORTHERN PRIDE. When he opened the seafood market across from Irving in Waldoboro, he found that lobstering and running a retail store was a bit much. Kendall added, “I had it for a year across from Irving’s. It did well, but it was just too much. There wasn’t time for me to do lobstering plus that, so my brother Scott took over for one year and he went lobstering and realized it was a lot of work.”

When a piece of property just east of Moody’s Diner came up for sale, Kendall said, “I told Dad, this land is for sale, why don’t we buy it, you and mom can run a seafood market and I will go lobstering and later in life I will do it. So, we bought it together. There was just a little building 24′ x 28′. Everything was in there for 20 years. They ran it, but I ran it in the winter when they went to Florida.”

“I wanted to do a takeout before someone else did it,” continued Kendall. “I said, ‘I am going to do it.’ So, three and a half years ago, the first of June we started up Delano Seafood Shack. That took off and then Covid hit. That helped us. Everybody was eating out; they weren’t going in restaurants and we got more well-known.”

It is extremely important to have good employees and the Shack does. “I had a couple cooks and they got different jobs,” said Kendall, “then Glendora (Lash) started and she has been here for three years. Stephanie Miller started three or four months after Glendora and she has been here ever since. Glendora’s daughter, Brianna and Stephanie’s daughter, Emma, works here. I am lucky, that I have two good cooks, and I am glad they have stayed.

What is next? Kendall said, “In April 2023 we are going to build a new shack. We have a 16 x 52-foot building coming here. The kitchen is going to be two and a half times bigger and going to have some sit-down tables on one end so people can come in during the wintertime. A lot of people like sitting in their cars, but there are some that just won’t eat in vehicles. We will probably have eight or ten tables but it will still be self-serve. When their order is done, we will take it to them, but there will be no wait staff.”

With the business growing, Kendall explained, “Two years ago, I just decided I can’t go lobstering, run the take-out and the market so I had to give up one. So, in April 2021 I stopped lobstering. It was hard getting out of lobstering, but when my sister Michelle died that changed it. I am going to do what I want to do. I know I am going to miss lobstering, but I’ve got out of it.”

With the Seafood Shack doing well and constantly growing, next came another major change. Kendall said, “I wanted to make a bigger store. I wanted to make it more convenient. We are going to have everything seafood I can fit in there. Normally I have 20 fresh seafood items in the display case and 200 frozen seafood options, which is huge. We have over 100 beer options, over 300 wine options and all kinds of Maine gifts. Another year or two, I am going to expand that part of it and have some more Maine business items in there. If we do better selling their items they do better.”

When the price of lumber and lobster doubled Kendall wondered if he had made a mistake. Before he added the addition on the market and opened the Shack business was growing, but not like it is now. Kendall realizes that the local customer is the most important aspect to his business and the tourist that come in help get the business to another level. Those that visit the Shack wonder over to the market and are shocked by what is offered there and those customers fall in love with the numerous selections.

Next Kendall said they are going to begin shipping seafood, which should add to the success of this business.

The Seafood Shack and market is open every day 0900 to 1730, but the Shack is closed Mondays and Tuesdays. Kendall added, “Last year was the first time the market was closed. Last spring, I said, ‘I’d never gone to Florida and seen my parent’s place’ so we closed in February for a couple of weeks. This year I am not sure, the girls might run it while I am gone.”

Looking back on his decision to quit lobstering Kendall has no regrets. He still has his license, but he is not at the point where he wants to go back fishing. One thing he does not miss are the days out on the water in the dead of winter or the toll it takes on your body. Kendall loves dealing with the public and making them happy and he certainly has done that with the changes that he has made to the Market and Shack.

So next time you are running through Waldoboro stop in and see just why the locals love to eat and shop there. If you have a classic car join them on Wednesday night for the drive-in.